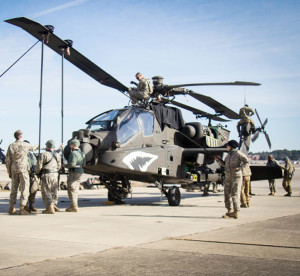 The awards program in the Pentagon Thursday recognized 13 of the best process-improvement initiatives completed during fiscal year 2016. The ceremony was hosted by Karl Schneider, the senior career official performing duties of the under secretary of the Army, and Lt. Gen. Edward Cardon, director of the Office of Business Transformation.

“We are here to recognize some very extraordinary organizations and extraordinary individuals for the work they have done,” Schneider said to the audience.

The money saved by the 11 organizations and their 13 initiatives can be “ploughed into war readiness,” Schneider said. He stressed that in order to pay for readiness, the military must reform the way it does business.

“We want people to think the way these people thought and do what these people did,” Schneider said of the recipients who used Lean Six Sigma principles and practices to adopt new ways of doing business and streamlining processes.

“The Army makes a conscious effort to analyze and improve the processes that undergird our core mission to fight and win our nation’s wars,” said Dr. Charles Brandon, director of the Continuous Process Improvement Office within the Army’s Office of Business Transformation.

Three organizations won the prestigious Process Improvement Deployment Excellence Award:
The Office of the Assistant Secretary of the Army for Financial Management and Comptroller executed improvements for FY 2016 that resulted in an estimated cost avoidance of $1.7 million, cost savings of $9.5 million and revenue generation of $55 million.

Two awards at the Enterprise level were presented to the Human Systems Integration Directorate, Assistant Secretary of the Army for Manpower and Reserve Affairs/Deputy Chief of Staff, G-1. One team reduced the process lead time in transferring the remains of service members to families from 22 days to 14 days.

Another team from the same office received an award for increasing its engagement on Soldier for Life programs by 60 percent. They improved awareness about employment, education and health care opportunities.

“We spent many hours trying to figure out how we could reach more civilians, more veterans and retirees,” said Staff Sgt. Daniel Young, who accepted the award for the team. He pointed out that the office is now reaching nearly three times the audience it did just a year ago.

The 82nd CAB streamlined the handling of thousands of helicopter parts, electronic components, tools and machinery.

The 21st Theater Sustainment Command, U.S. Army Europe improved accuracy in personnel tempo reporting from 0.75 percent to 60 percent for unit readiness, resulting in a net cost avoidance estimate of $703,000 for fiscal years 2016 to 2022.

Recipients of Lean Six Sigma excellence awards from 11 organizations across the Army pose after being recognized by Karl Schneider (center), the senior career official performing the duties of the under secretary of the Army and Lt. Gen. Edward C. Cardon, director of the Office of Business Transformation, May 18, 2017.

Timothy Mersereau at FORSCOM G2 took his green-belt Lean Six Sigma training in Spring 2016 and soon began working with his colleagues on how to improve G-2X performance reporting.

“The biggest take-away from this project was communications and the importance of communicating clearly,” Mersereau said. “It saves valuable time every month. This was a good learning experience and a great chance for my team as we worked together.”

“Anything we can do that frees up time to allow Soldiers to conduct training is significant for Army readiness,” said FORSCOM G-8’s Steven Sawicki, a Master Black Belt specialist with the Business and Readiness Improvement Division.

For example, the 82nd Airborne Division conducted its Deployment Readiness Exercise in January 2017. About two months before that exercise began, FORSCOM and the 82nd Airborne Division’s Operations Research and Systems Analysis, or ORSA, and Lean Six Sigma team began planning. They ultimately had 12 to 15 people located at sites during the training exercise to collect over 40,000 data points — particularly studying six nodes of exercise activities.

The Great Lakes and Rivers Division, Nashville District, U.S. Army Corps of Engineers reduced its contracting office labor burden from 45 hours to 25 minutes per supply order and acquisition costs from $4,365 to $41 through using a Defense Logistics Agency program. The project enabled contract specialists to focus on more complex procurements, resulting in an estimated net cost avoidance of $1.7 million for fiscal 2016 to 2020.

This was the first LEAP award received by the Army Corps of Engineers’ Nashville District, officials said. The district implemented a pilot program to use the Defense Logistics Agency’s Facilities Maintenance, Repair Operations Program to purchase supply items faster and save funds. The items ranged from crane cables to air winches, remote switches and sump pumps.

The initiative reduced the time for orders to be processed by 50 percent from an average of 75 days to 37 days, said Lt. Col. Stephen Murphy, U.S. Army Corps of Engineers Nashville District commander. “More importantly, because of the efficiencies gained … our projects across a seven-state area are getting the supplies they need much faster.”