A novel technology called “Tactical Augmented Reality,” or TAR, is now helping Soldiers precisely locate their positions, as well as the locations of friends and foes, said Richard Nabors.

It even enables them to see in the dark, all with a heads-up display device that looks like night-vision goggles, or NGV, he added. So in essence, TAR replaces NVG, GPS, plus it does much more.

Currently, most Soldiers use a hand-held GPS system that approximates their position, he said, but only if their device is geo-registered to their location.

Geo-registration is the alignment of an observed image with a geodetically-calibrated reference image.
TAR does the geo-registration automatically, he said.

Staff Sgt. Ronald Geer, a counterterrorism non-commissioned officer at CERDEC’s Night Vision and Electronics Sensors Directorate, said that with TAR, Soldiers don’t have to look down at their GPS device. In fact, they no longer need a separate GPS device because with TAR, the image is in the eyepiece, which is mounted to the Soldier’s helmet in the same way NVG is mounted. 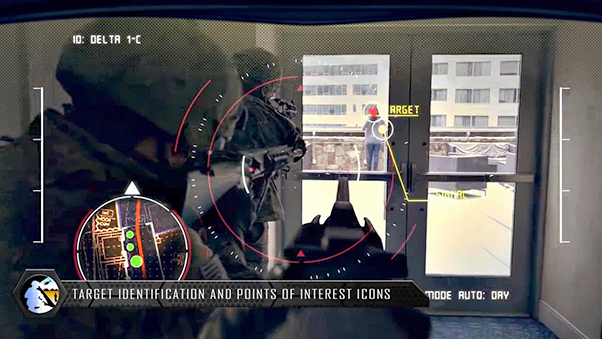 So what they would see, he said, is the terrain in front of them, overlaid with a map.

TAR is also designed to be used both day and night, he added.

Furthermore, Geer pointed out that the eyepiece is connected wirelessly to a tablet the Soldiers wear on their waist and it’s wirelessly connected to a thermal site mounted on their rifle or carbine.

If a Soldier is pointing his or her weapon, the image of the target, plus other details like the distance to target, can be seen through the eyepiece.

The eyepiece even has a split screen, so for example, if the rifle is pointed rearward and the Soldier is looking forward, the image shows both views, he said.

Also, a Soldier behind a wall or other obstacle could lift the rifle over the wall and see through the sites via the heads-up display without exposing his or her head.

Finally, Geer said that TAR’s wireless system allows a Soldier to share his or her images with other members of the squad. The tablet allows Soldiers to input information they need or to share their own information with others in their squad.

Technology breakthrough
David Fellowes, an electronics engineer at CERDEC, said that the key technological breakthrough was miniaturizing the image to fit into the tiny one-inch-by-one-inch eyepiece.

Current commercial technology compresses images into sizes small enough to fit into tablet and cell phone-sized windows, but getting a high-definition image into the very tiny eyepiece was a challenge that could not be met with commercial, off-the-shelf hardware. 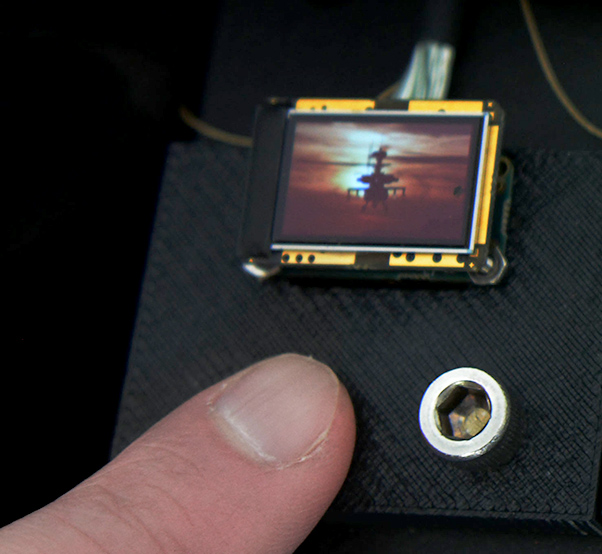 A novel technology called “Tactical Augmented Reality,” or TAR, is now helping Soldiers precisely locate their positions, as well as the locations of friends and foes. The technology enables a tiny, heads-up display.

Since about 2008, CERDEC, the Army Research Laboratory and industry have been working to make this miniaturization happen, he said.

By about 2010, the image was compressed enough to be shown in black and white, as well as a greenish monochrome version, he said.

Those systems have already been fielded to certain units, he said.

Fellowes said he’s not sure when those will be manufactured and fielded, but during user testing, Soldiers expressed their deep appreciation of the image sharpness and contrast.

He added that the TARs will provide Soldiers with a much higher level of situational awareness than they currently have and he said he fully expects that the devices will save lives and contribute to mission success.