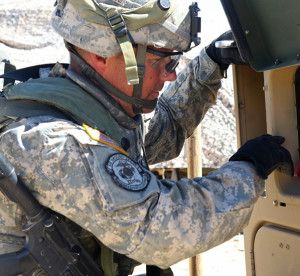 The past two days have been long and challenging for Soldiers of the 155th Armored Brigade Combat Team as they travel through “the box,” a replica of the tough operational environment that America’s war fighters face in combat, at the National Training Center.

On the morning of May 26, 2017, Soldiers with the 155th convoyed from their temporary assembly areas to begin simulated combat operations throughout the box as their field training begins for their NTC rotation.

Companies A, B, C, and Headquarters Company of the 106th set up their operations centers near each other as a brigade support area. Each of the four companies has its own niche in supporting the 155th but work as one unit to accomplish their mission.

Headquarters Company takes care of all administrative and tactical needs of the battalion’s headquarters.

“The first part of being at the National Training Center was boring because all we were doing was unloading and loading our gear,” Caron said. “Being out here is the fun part of training because this is where everybody does their actual jobs and we all work together.”

As a combat medic, Caron will help Soldiers during mock mass casualty incidents in the field during the NTC rotation. 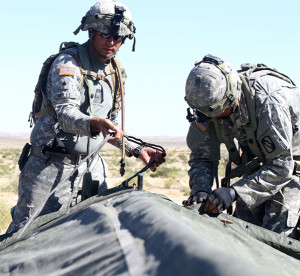 Sgt. Joshua Niolet, a fire control repairer with Company B, 106th Support Battalion, 155th Armored Brigade Combat Team, Mississippi National Guard, and a fellow Soldier set up a tent while the battalion sets up its operations area May 27, 2017 at the National Training Center, Fort Irwin, Calif.

“In the field we get hit with mass casualties every few hours and all of us have to work together to get them treated,” said Caron.

The medic team for Company C responds to casualties quickly and accurately so Soldiers can get back to their operation areas and maintain combat readiness.

The 155th is the largest unit in the Mississippi National Guard with over 3,800 Soldiers and the 106th is a vital part of the 155th because without logistics and support, the brigade can’t continue forward with missions.

The National Training Center, which is over 1,200 square miles, is the only place in the United States that can accommodate brigade on brigade operations.

“Our training is going to be challenging, but whatever challenges you makes you better, so we’re going to learn from it,” said White.