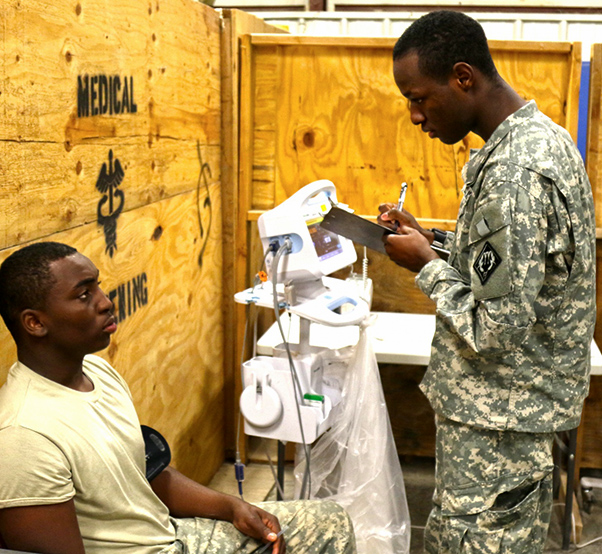 Spec. Akeem M. Oliver, a health care specialist with the Mississippi Medical Detachment, Mississippi Army National Guard, speaks with a Soldier being evaluated in the detachment’s aid station 21 May, 2017 at the National Training Center, Fort Irwin, Calif. The medical detachment is providing care for the service members from approximately 40 units from around the country taking part in the 155th Armored Brigade Combat Team’s training rotation at NTC.

The Mississippi National Guard’s largest unit, the 155th Armored Brigade Combat Team, comprised of about 3,800 Soldiers, is in California for combat training at the National Training Center, Fort, Irwin.

Collectively, approximately 5,500 service members from 40 Army and Air Force units from Mississippi and around the country, including Puerto Rico and Alaska, are taking part or supporting the brigade as they face the challenges of the national premiere military training facility for combat operations that is known for its tough, desert landscape and scenarios that have been developed from actual combat experiences.

The nature of the Soldier’s work can, unfortunately, result in injuries from the intense preparation activities that go along with an armored brigade preparing for combat.

The Mississippi Medical Detachment, based in Jackson, Miss., is providing care at an aid station where Soldiers can be treated by trained, professional medical personnel while away from home.

“It’s a smaller version of a primary care clinic,” said Cpt. Tanya L West, a nurse with the Mississippi Medical Detachment. “Even though it’s limited, we do have a wide variety of medications to treat the patients.”

“We have medicine we can give them, and if they have a sprained ankle we can wrap it,” said Spec. Akeem M. Oliver, a combat medic and health care specialist with the medical detachment. “If they are low on fluids we can give an IV here so we don’t have to take them all the way to the hospital. We also have doctors that can evaluate them.” 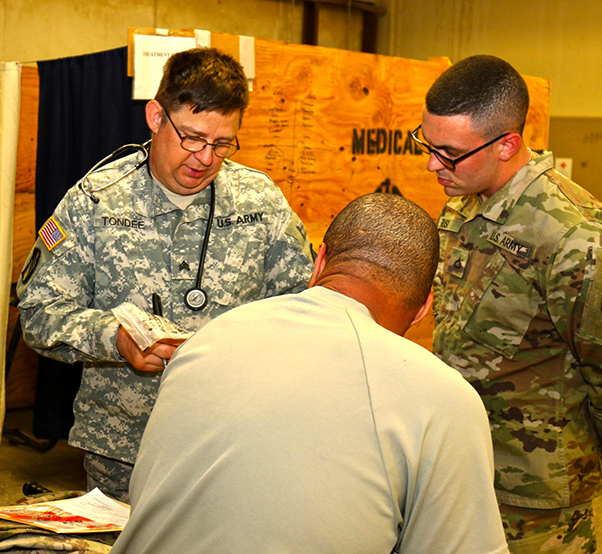 Similar to the civilian doctor’s offices and clinics near the Soldiers’ homes, some injuries such as broken bones are too severe for the aid station to properly diagnose. The clinic is prepared to take a patient to the on-post hospital for tests such as x-rays and lab work.

The medical detachment’s capabilities include mental and behavioral health care so that Soldiers can talk to someone about the difficulties they are encountering without having to leave the brigade area and to go to another clinic or hospital.

The mental health specialists treat patients on a case-by-case basis and determine the best course of action, West said.

Chaplains also work with the medical personnel so the patient can talk to someone who can help and encourage them to get through this training, said Oliver.

The Mississippi Medical Detachment will be at NTC with the 155th ABCT and supporting units until the end of the rotation ensuring that there are qualified medics, nurses, and doctors to care for the Soldiers as they experience the stresses of simulated combat in an unfriendly environment. 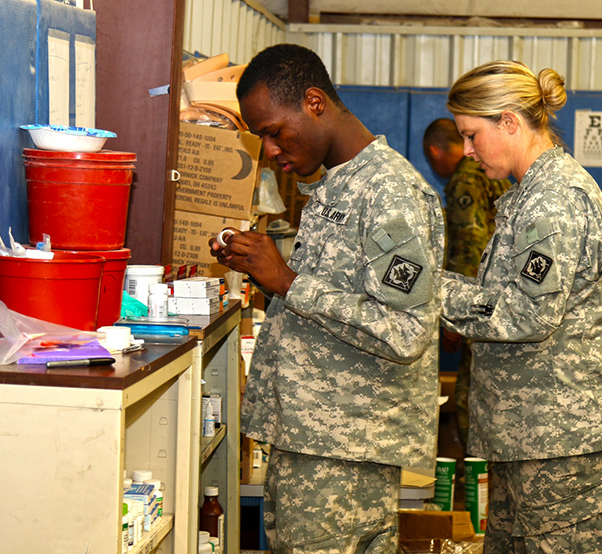