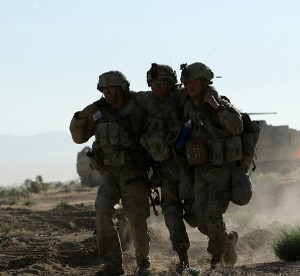 The scenario-based training at NTC pitted the unit as the decisive-action element against an opposition force (OPFOR) that was capable of simulating a wide variety of adversarial threats that training units may encounter in real-world environments. During the rotation, the “Dagger” brigade was faced with combatting criminal, insurgent and near-peer oppositions in both rural and urban environments.

“I think what we emphasized with it was that each Soldier had an opportunity to contribute in a meaningful way against the enemy,” Gardner said. “I think each of them took that opportunity that was presented to them and we had lots of instances of Soldiers doing outstanding things in the face of the enemy.”

Facing the enemy required myriad assets, resulting in a robust force capable of handling the OPFOR in multiple arenas of the battlefield. In total, the Dagger brigade brought with them approximately 3,300 Soldiers who are organic to the unit, an additional 850 attachments and four supporting units. This collection of skill sets and assets made it possible for the unit to maintain a fast paced operational tempo that required motivation from every Soldier at every level.

“A Soldier today got an (Army Commendation Medal), they said he was in the unit a week — 10 days — he got his stuff and was put on the bus and came out here,” said Command Sgt. Maj. Craig Copridge, 2nd ABCT senior noncommissioned officer, after an awards ceremony commemorating outstanding Soldiers from NTC rotation 17-06. “So I think even that young Soldier had the morale had the high spirit to be a part of the team. What we try to do here at Dagger brigade is build a team — a team amongst teams — so Soldiers feel like they’re really contributing to something big.” 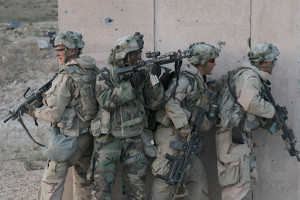 Soldiers from 1st Battalion 18th Infantry Regiment, 2nd Armored Brigade Combat Team, 1st Infantry Division, get into a stack before breaching a door and clearing a building during a live fire exercise at the National Training Center on Fort Irwin, Calif., May 10, 2017.

In order to maintain that motivation, training for this NTC rotation and the upcoming European rotation began nearly a year ago at both the unit and individual level. The challenges Dagger Soldiers faced in the Mojave Desert, such as wearing Mission Oriented Protective Posture (MOPP) gear in an austere environment, were lessened by a long-standing emphasis on physical and mental resilience.

“PT (physical training) every day, I think that’s the first part, you have got to be physically tough,” Copridge said. “In addition to that, you have got to be mentally tough. So when the day did come, when it was in 95 degrees and you were in MOPP (level) two and kind of feeling bad, you kind of knew that ‘hey, that is part of the mission.’ So, your physical training and your mental fitness enabled the Soldiers to get through it.”

The Dagger brigade plans to take lessons learned from this NTC rotation and apply them at Fort Riley before departing for Europe.
“This was a great rotation; I think we’ve done well,” Copridge said. “I think as the commander said, ‘we are a learning and a listening organization.’ So, I think the OCTs (observer controller trainers) here are the National Training Center have provided us with a lot of great feedback that we can take back to home station and refine some things. I think that as we get ready to go to Europe, we’ll be that much more set in our confidence of our ability that if anything is called upon, you know the Dagger brigade will once again be on point for the nation.”

While NTC rotation 17-06 was a culmination of more than a year of individual skill training, gunneries and larger events like Danger Focus II, it is also a stepping stone toward the Dagger brigade’s end goal of a successful deployment to Europe.
“I am proud that the brigade worked hard; they did well against the enemy,” Gardner said. “They continued to learn, continued to keep a positive attitude and I think everyone is excited to take this training and go forward in Europe and keep training.”