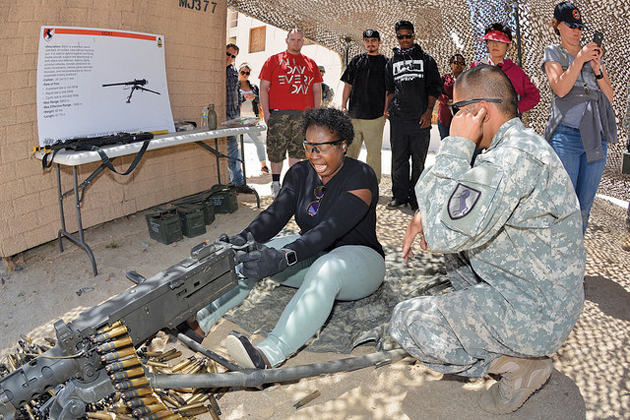 FORT IRWIN, Calif. — Employees of Fort Irwin participated in the National Training Center (NTC) Box Tour to get a first-hand experience of how their efforts help support the mission here, April 28.

Going out to where Soldiers train the force is part of the Civilian Acculturation Program to help civilians understand their role as members of the Army Profession.  The program involves both onboarding and orientation for new employees.  Onboarding is the strategic process of welcoming new employees, establishing responsibilities and familiarizing them with the Army culture.

Samantha Mendoza-Rodriguez who works at NTC G4 as an Logistic Management Specialist was last in the box as a Sergeant First Class on Goldminers team from 2005-2008.  “It was a good experience, the built cities provide a realistic scenario of what soldiers may encounter in their Global Counterinsurgency operations.” she stated.

Her position and role is to provide asset visibility of equipment and to source authorized equipment to our U.S. Army Forces Command (FORSCOM) units like 11th Armored Cavalry Regiment (ACR) used an M1151A1 (Up-armored High Mobility Multipurpose Wheeled (HMMWV) Vehicle and a modernized 240B machine gun during the role playing event. The equipment they used were sourced by NTC G4 team during the past years.

Monthly, visitors can experience firsthand how America’s warriors prepare for deployment. That preparation is done through our Afghan villages and culture, the austere environment, terrorists, insurgents, local populace, tribal/government officials, and the most technologically advanced and elaborate training facilities in the world.

To find out more about NTC Box Tours, visit http://www.irwin.army.mil/Pages/VisitorsTab/BoxTour.html.