Fort Irwin, Calif ­— Soldiers from The National Training Center and Fort Irwin spread across the High Desert and surrounding areas to commemorate those who have given their all in defense of the Nation during Memorial Day Ceremonies Monday.

From Barstow to Big Bear, ceremonies were held at local cemeteries and veteran’s memorials to honor those Soldiers, Sailors, Airmen, Marines and Coastguardsmen who lost their lives fighting in defense of the United States.

Fort Irwin Chief of Staff, Col. Matthew Moore addressed the community gathered at Mountain View Cemetery in Barstow. In his prepared remarks, Moore spoke of the dedication of the local Inland Empire communities and their support of the Country during World War I.

He told the story of the “Liberty Boys,” the first 25 men from the area to be called to active duty when the United States entered the “War to End All Wars.” The first 19 boarded a train on September 5, 1917 in San Bernardino. Over 20,000 well-wishers showed up at the station to say good-bye and wish them well as they headed for training in Washington State.

When the train arrived at the Harvey House in Barstow, the final six men, all residents of the High Desert boarded the train.

Not long after the Liberty Boys left for training, word would come of the first casualty in the war from the Inland Empire.

John Edgar Beckingsale of Ontario, had enlisted as a lieutenant in the British Army in 1916, before the United States had entered into the conflict. Word arrived in Ontario on Oct. 7, 1917, that Beckingsale had been killed in the Flanders Region of Belgium on Aug. 22.

“Theirs is a legacy nearly two-and-a-half centuries old. Whenever freedom is threatened, gallant men and women of America risked, and too often gave their lives, in the service to America,” Moore said. “It’s what has always made America the beacon of hope and freedom that it is – the generations of brave and courageous warriors who dedicate themselves to the defense of the United States and that my friends, is why we have Memorial Day.”

In speaking of the dedication and valor of those who have faced combat, Tim Silva, Barstow City Council Member said, “They go and fight for everyone’s freedoms, they rush into the face of danger so that we can sleep well at night.

Lt. Col. Ryan Moses, Commander, Regimental Support Squadron, 11th Armored Cavalry Regiment spoke of the first members of the Lexington militia to fall in defense of the United States, at Concord Green, Massachusetts, at the beginning of the American Revolution.

“Ever since eight members of the Lexington militia lost their lives in the first battle of the American Revolution, nearly 1.2 million service members – Soldiers, Sailors, Airmen, Marines and Coast Guardsmen – have made the ultimate sacrifice,” he said.

President Reagan spoke of the obligation that every American owes those who fought and died in defense of the United States, for the freedoms that we enjoy today. He reminded us that freedom is not purchased cheaply, and that the cost imposes a burden on us all.

“If words cannot repay the debt we owe these men, surely with our actions we must strive to keep faith with them and with the vision that led them to battle and to final sacrifice,” Reagan said.

In closing Melton challenged the crowd, “I ask that each of us take up President Reagan’s challenge, and through our own actions, keep faith with all those who have fought our wars, by keeping their memory alive,” he said. 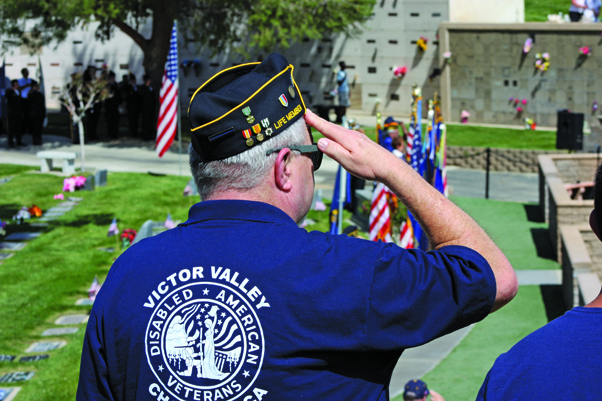 A member of the Victorville Disabled American Veterans salutes during the Memorial Day Service at the Victor Valley Memorial Park. 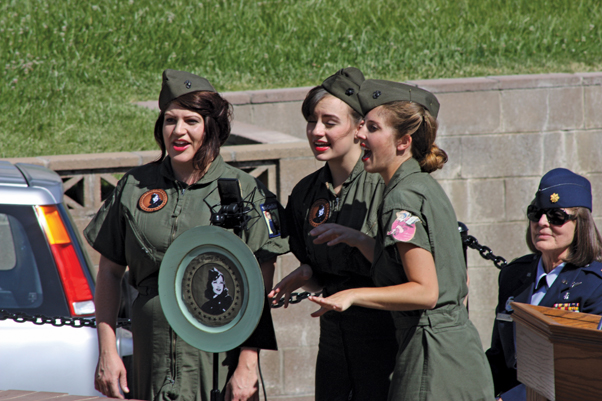 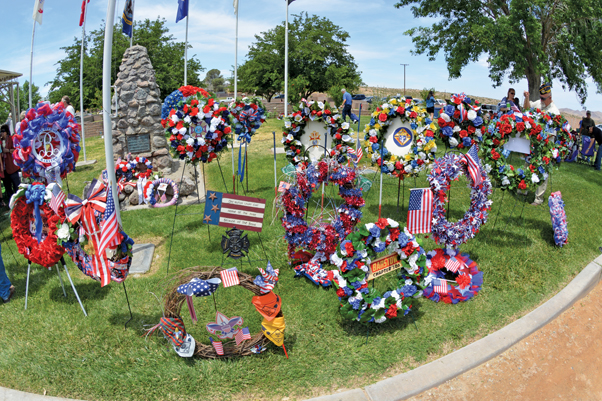 Some of the 21 wreaths presented by various local service groups at the Mountain View Cemetery Memorial Day Service. 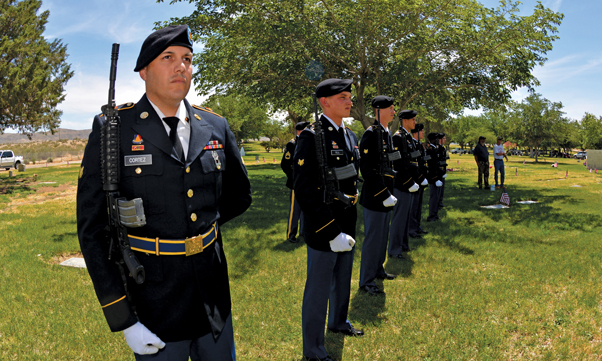 Soldiers from the 916th Support Brigade stand ready to fire a rifle salute at the Mountain View Cemetery in Barstow. 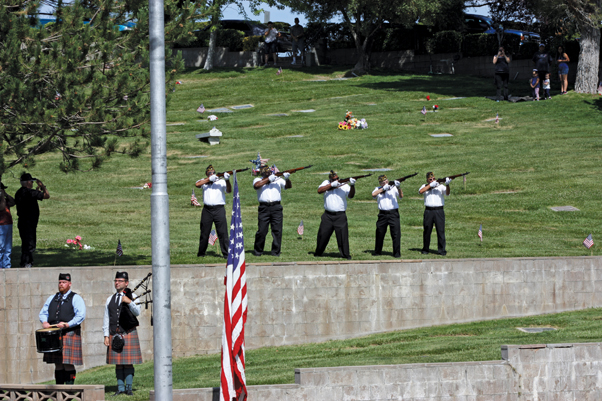 Members of American Legion Post 229 fire a rifle salute at the conclusion of the Memorial Day Ceremony at Victor Valley Memorial Park.