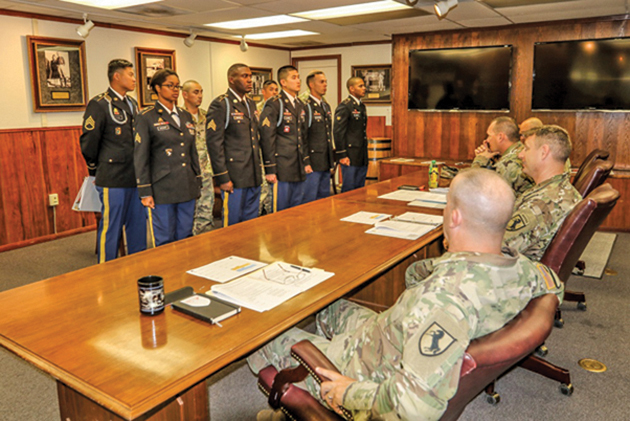 FORT IRWIN, Calif. — The 11th Armored Cavalry Regiment conducted an intense competition in order to determine the Regiment’s most exceptional Non-Commissioned Officer and Soldier for the 4th Quarter, fiscal year 2017, May 16.

The military board has been used as a tool to evaluate the knowledge and military bearing of Soldiers throughout the Army’s history. This process determines who is the most competent in their knowledge of Army regulation, history and doctrine, while maintaining exceptional military bearing in the face of extreme stress.

The 11th ACR conducts these boards to allow every Soldier the opportunity to test themselves against the best that the Regiment has to offer. Through a long, rich history of excellence, the Blackhorse Regiment continues to train the best and brightest of the Army, enhancing their careers and opening new doors for its Soldiers.

The NCO and Soldier of the Quarter Board is not for the faint of heart. Soldiers are evaluated in a multitude of events, including the Army Physical Fitness Test, Army warrior tasks and battle drills, a six-mile foot march, and land navigation. Upon successful completion of all of those evaluations, Soldiers then take part in an oral board, where the most senior NCOs of the regiment evaluate their appearance and knowledge of Army doctrine.

“You have to be versatile with your studying, because you’re not sure what they’re going to ask you,” said Sgt. Jacquline Stuart, a wheeled vehicle mechanic assigned to Supply and Transportation Troop, Regimental Support Squadron, 11th ACR. “Some boards will ask you situational questions, while others stick to the regulations.”

The Trooper selected as the NCO and Soldier of the 4th Quarter for FY 2017 are recognized throughout the Regiment and distinguished examples for all others to emulate.

“I wanted to be something bigger than myself, so here I am, trying to be the best that I can be,” said Pfc. Gerald Rutherford Jr., an infantryman, Fury Troop, 2nd Squadron, prior to entering the oral board.

The Troopers selected have truly exemplified what it means to be a Blackhorse Trooper through their commitment to the mission first, and their additional desire to be the best. Their accomplishments demonstrate those standards, loyalty and integrity that is expected of Cavalry Troopers in the Best Damn Regiment.

The 11th ACR NCO and Trooper of the Quarter are Sgt. Brandon Grays, an indirect fire infantryman, Headquarters and Headquarters Troop, 1st Squadron, and Pfc. Gerald Rutherford Jr. These two Troopers have faced the gauntlet and succeeded. Who will be next to face the challenge to demonstrate their expertise and proudly represent the Blackhorse Regiment?