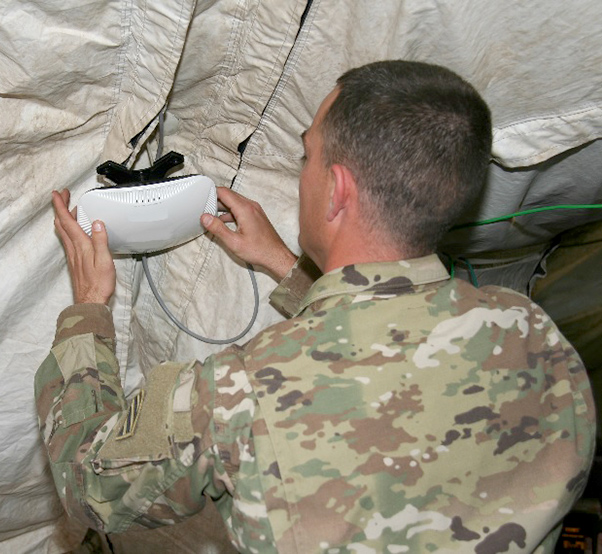 A Soldier from the 1st Armored Brigade Combat Team, 3rd Infantry Division (1/3 ID) sets up a Secure Wireless Access Point in the brigade main command post as part of a pilot of the capability during the unit’s training rotation at the National Training Center, at Fort Irwin, Calif., in April 2017.

“From a mission standpoint, as a brigade commander, the ability to have a mobile command post and exercise mission command with Secure Wireless continues to be an enabler,” said Col. Phil Brooks, commander for 1/3 ID. “When facing a near peer threat in a complex environment, it is imperative that our operations centers become one, more mobile with ability to move quickly, and two, that we have the ability to rapidly collaborate in planning to defeat a near peer adversary.”

The unit piloted Secure Wireless during its April NTC rotation to provide user feedback to the Army prior to the system’s fielding. Secure Wireless has been accredited by the National Security Agency and is managed by Project Manager Warfighter Information Network-Tactical (PM WIN-T), the Army’s tactical network program office, assigned to the Program Executive Office for Command, Control and Communications-Tactical (PEO C3T).

Without wireless capability, establishing a network in a typical brigade command post takes several hours and requires nearly two dozen boxes of costly CAT 5 cable that weighs hundreds of pounds. Every time a command post is relocated, or “jumped,” the cables have to be cut, laid out, configured and plugged in, and often replaced because of damage and continual wear and tear. 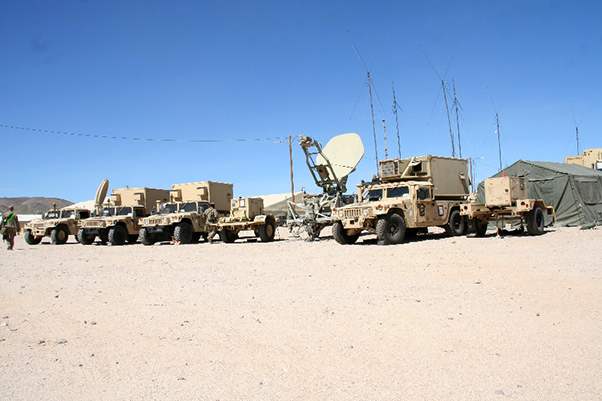 The 1st Armored Brigade Combat Team, 3rd Infantry Division (1/3 ID) utilized Secure Wireless as part of a pilot of the capability during the unit’s training rotation at the National Training Center, at Fort Irwin, Calif., in April 2017. The unit’s tactical network is enabled by Warfighter Information Network-Tactical network transport equipment seen here during the NTC rotation.

By going wireless, command post setup and tear down times can be reduced from hours to minutes, and less cable and protective flooring have to be transported from location to location. Soldiers can be untethered from their workstations inside the tactical operations center (TOC) for improved collaboration. Most importantly, network downtime and the loss of mission command systems following a command post jump are significantly reduced.

Once the unit arrives at its new location and sets up the physical structure of the command post, Soldiers can turn on their Wireless systems and the network can come up first instead of last, in as little as minutes instead of hours, with everyone connected to the network simultaneously, instead of one-by-one as they wait to get wired. Soldiers can also stay connected longer while the TOC is being disassembled to jump to a new location.

“Technology keeps moving forward at an astonishing pace. You must be knowledgeable about Army trends, understand the larger Army picture and be willing to push boundaries to ensure your unit remains on the cutting edge and with the greatest tactical advantage,” said Lt. Col. Chris Byrd, Division G6 for 3rd ID. “Secure Wireless is that revolutionary capability that postures our Division well for the future.”

Brooks said that in 2003, as a part of the initial “thunder run” from Kuwait to Baghdad during Operation Iraqi Freedom, 1/3 ID’s brigade operations center was constantly jumping and on the move, with the unit reaching Baghdad within 100 hours.

“And [looking ahead] the operations center will continue to move in order to effectively conduct mission command as part of our operation in a decisive action environment,” Brooks said. 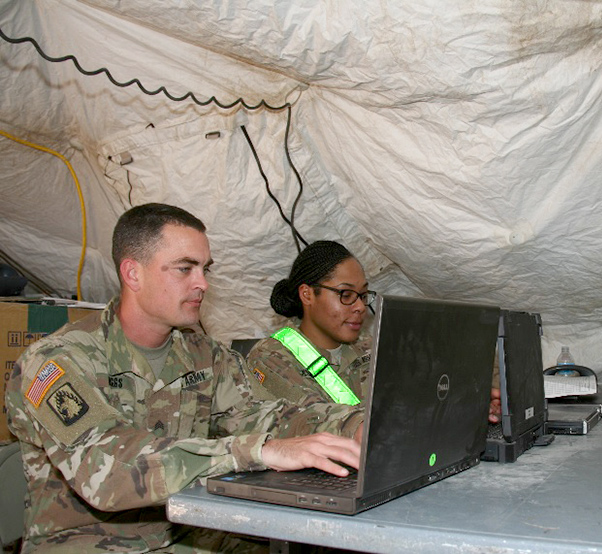 Soldiers from the 1st Armored Brigade Combat Team, 3rd Infantry Division (1/3 ID) demonstrate Secure Wireless capability in the brigade main command post as part of a pilot of the capability during the unit’s training rotation at the National Training Center, at Fort Irwin, Calif., in April 2017.

During the NTC rotation, the unit jumped its large brigade main command post five times, in support of its realistic and complex decisive action operational mission set. Maj. Michael Donegan, 1/3 ID communications officer (S6), sees time savings as the biggest benefit of employing Secure Wireless, “in rapidly getting the Wireless Access Point up and not having to do anything else but have users log in and have those systems securely connected to the tactical network all at once. Going forward, that will be invaluable,” he said.

“Anything you can do to shave time from TOC setup and tear down is really critical,” Donegan said. “You can liken it to racing, anything to get that extra advantage.”

Over the past decade, the Army “resigned itself to a counter insurgency (COIN) fight, living on static and immobile forward operating bases that were heavily wired,” Donegan said. Since then, as near peer adversaries continue to pose increasingly lethal threats in multiple domains, the Army has shifted the way it trains and will fight, from COIN operations back to a more expeditionary decisive action model. NTC’s rotations reflect that shift, simulating the complexities of battle that U.S. Forces could now face when fighting near peer adversaries.

“In the current NTC [desert] environment, there is no cover or concealment,” Donegan said. “You absolutely need to have a smaller footprint, not only to be less visible (both physically and electromagnetically), but again, to reduce the time it takes to jump.”

“A lot of brigades have been struggling with how to reduce the footprint of their TOC and be more agile, but as technology exponentially grows, it becomes more difficult,” he said. “We keep adding equipment and TOCs are becoming more complex, which adds to the overall setup time to becoming fully mission command capable. Secure Wireless is reducing that time, and that is a good thing.” 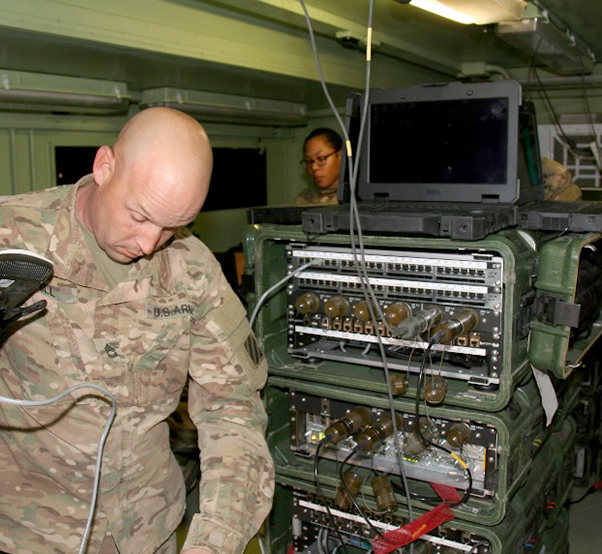 A Soldier from the 1st Armored Brigade Combat Team, 3rd Infantry Division (1/3 ID) sets up a Secure Wi-Fi Access Point in the network operations center that supports the brigade main command post, as part of a Secure Wireless pilot during the unit’s training rotation at the National Training Center, at Fort Irwin, Calif., in April 2017. The Secure Wi-Fi network stack is to his right.

Along with advanced network operations capabilities, the Secure Wireless package also comes with comprehensive security features. These include the Wireless Intrusion Detection System, which enables the system to identify potential hackers trying to get into the wireless network, displaying their location on a graphic and enabling communications officers to shut them down remotely and immediately, before they can get in.
“Secure Wireless can also eliminate that single point of failure along the network,” said Chief Warrant Officer 2 Jeffery Allen Leitheiser, server technician and automations officer for 1/3 ID, who also serves as the information assurance manager for the brigade. “It eliminates possible problems [and makes troubleshooting easier]. You know if the connection is working or not. With cable, if there is a problem, Soldiers have to go in and manually test each and every cable, which is often under flooring.” 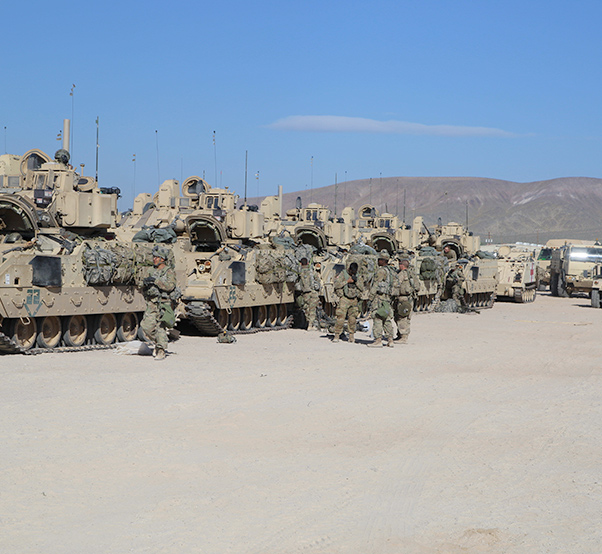 The Army has conducted several risk reduction events of the capability, including two events with the 25th ID at Schofield Barracks, Hawaii, in August 2015 and August 2016 and one with the Delaware Army National Guard 198th Signal Battalion, in Georgetown, Delaware, also in August 2016. The Army also demonstrated the capabilities of Secure Wireless during Network Integration Evaluation 15.2 in May 2015 and with a full brigade command post at NIE 16.l in the fall of 2015 at Fort Bliss, Texas.

As it moves forward with the eventual official fielding of Secure Wireless, the Army is using Soldier feedback from these and other events to continually improve the capability and the way it will be used to support mission requirements.

“Secure Wireless will change the way the Army conducts operations,” said Lt. Col. Mark Henderson, product manager for WIN-T Increment 1, which manages the Army’s Secure Wireless capability for the Army. “It provides agility and operational flexibility, enabling commanders and staff to stay securely connected with full situational awareness and mission command capability for the maximum amount of time possible, so they can make faster, more informed decisions and move out when the mission demands.” 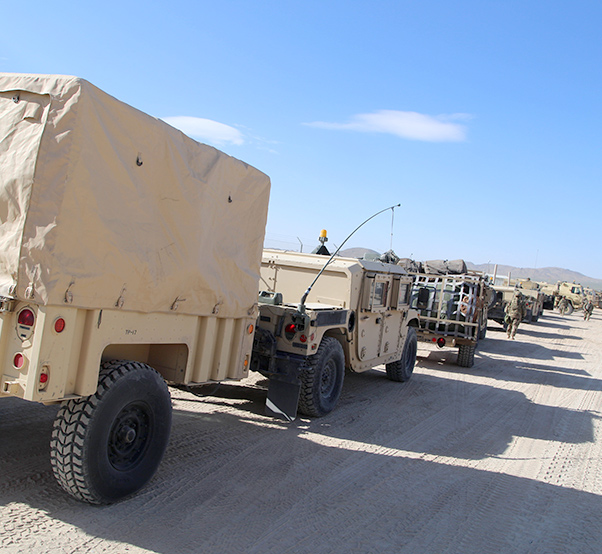 U.S. Army Soldiers with 1st Brigade Combat Team, 3rd Infantry Division, depart garrison to the desert during Decisive Action Rotation 17-05 at the National Training Center in Fort Irwin, Calif., March 31, 2017. Without the use of Secure Wireless, every time a command post is relocated, or “jumped,” the cables have to be cut, laid out, configured and plugged in, and often replaced due to damage and continual wear and tear. Secure Wireless significantly reduces command post set up/tear down times. 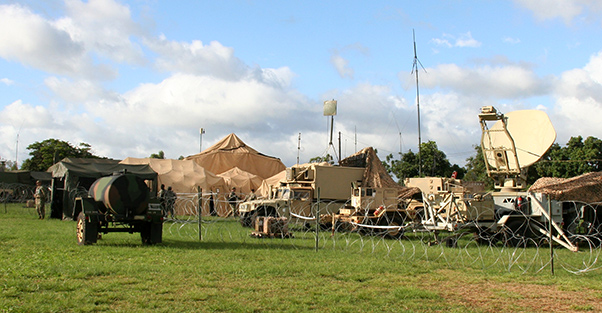