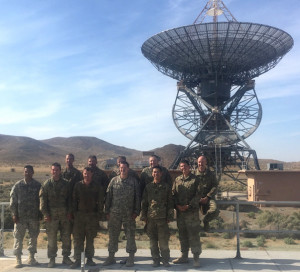 The newly formed Cyber Electromagnetic Activities section of 2nd Armored Brigade Combat Team, 1st Infantry Division, poses for a photo during decisive action rotation 17-06 at the National Training Center on Fort Irwin, Calif., in May. The section was comprised of electronic warfare noncommissioned officers from multiple battalions within “Dagger” brigade.

“Everyone thinks that it is Jedi mind tricks,” said Sgt. 1st Class Thomas Connolly, 2nd ABCT’s CEMA non-commissioned officer in charge. “Everyone is so used to shooting a bullet and seeing it hit a target, or shooting rounds and seeing stuff get blown up. People don’t really understand the cyber or EW fight until they’re being jammed on everything.”

EW Soldiers locate enemy transmissions on the electromagnetic spectrum and use what they find to determine, among other things, the location of the enemy.

“A lot of stuff nowadays has some type of emitter from cell phones to wireless mice … no one can see it,” Connolly said. “Our target is stuff like that on the (electromagnetic) spectrum such as communications, data links like Wi-Fi, anything like that is what we are here to target in order to facilitate the commanders on the field.”

The role that Connolly and his Soldiers played at NTC in April and May was a new opportunity for them, he said. Traditionally electronic warfare personnel have been designated to battalion and brigade operations shops as planners, rather than hands-on professionals on the front lines. However, 2nd ABCT embraced the changing role of electronic warfare. By building on what other units have been doing across the Army, the Dagger brigade was able to use these personnel in concert with maneuver elements.

“It’s definitely a whole new concept for the Army — putting electronic warfare specialists on the front lines — but, they actually did it way back in the 80s and in Vietnam too,” Connolly said. While previous incarnations of EW involved intercepting enemy communications, the current legacy has been building on that endeavor.

“We set up into three different teams,” Connolly said. “Two electronic warfare support teams … which pretty much monitor indicators and warnings so if something comes up we can warn people around us. Then we had one electronic attack team, which those guys would be my jammers on the ground if I needed it. Which we did use them to jam, same thing with our two enabler teams.”

In addition to simply jamming an enemy signal, modern EW Soldiers with the right equipment are capable of much more, Connolly said. When dealing with unmanned aircraft systems, the team has a host of options that include downing the aircraft, or even requiring it to return to a designated landing area.

“We were able to do a lot of new stuff and it pretty much shaped the battlefield a whole lot more against the OPFOR (opposing force),” Connolly said, “just because they were so used to using their UAS to be able to call for fire all the time on all the units. No one could do anything about it. But we were able to do it, we were able to shut down 60 percent of their UAS missions.”

Taking away a large part of the OPFOR’s surveillance made for fewer battalion and brigade jumps, saving time and energy throughout the unit.

“Once we intercept it, we figure out if it allowed for jamming or not,” Connolly said. Following the intercept and determination, the rest of the training became notional as the EW teams didn’t want to potentially destroy the expensive UAS systems.

The teams found themselves capable of stopping additional threats and hampering the OPFOR on the ground as well.

“It’s not just UAS; we found a few observation points we called for fire on,” Connolly said.

Having been spread across the brigade up until the rotation, there were some tactical hiccups within the teams that required some effort before cohesion was built, according to Connolly. However, by the end of the rotation, EW Soldiers from multiple battalions were working together as one solidified asset.

“One thing that I’ve noticed with all of the EW NCOs, as soon as we heard that we were consolidating for NTC, we all wanted it to succeed,” Connolly said. “Not just for the consolidation part afterwards, but we actually got to go do our jobs so a lot of the EW NCOs were extremely motivated.”

EW Soldiers who work closely with planning operations to provide support also saw the benefit of having teams in the field.

“It is better for them to be in the field where they can actually do their job, like triangulating signals,” said Staff Sgt. Kyle Nussbaumer, 2nd ABCT CEMA spectrum manager. “If they were at the TOC (tactical operations center) location they wouldn’t be able to do that. (It allowed for) quicker, more accurate reporting.”

Communication between the spectrum manager and the EW teams helped expedite the process of elimination when attempting to detect enemy threats.

“Anybody could be out there with let’s say a spectrum analyzer and see a bunch of lines but not know exactly what it is,” said Sgt. Albert Manglona, electronic warfare NCO. “I was on both sides, for the first couple of days I was with the teams and I was with the TOC. From the TOC’s perspective it is good that they were out because, it gives the TOC a better understanding of what is out there. Having them (EW teams) relay back whatever information they pick up or basically whatever they detect. Rather than just hearing it from unit’s who (might) not necessarily know what they are looking at.”

Ultimately the EW consolidation proved fruitful for Dagger brigade, which has decided to keep EW Soldiers from across the formation consolidated.

We “proved the concept of consolidation,” Nussbaumer said. “I think the command teams now have a better understanding of how valuable EW is. It’s a lot easier for them now that they know how it works and what asset it brings to the table, they’re more willing to give up their EW NCOs for consolidation so that it better supports the team as a whole.”

Staying consolidated will also have benefits to the EW Soldiers with both their tactical and technical skills as well as their careers, Connolly said.

“Now I have EWOs (electronic warfare noncommissioned officers) surrounded by EWOs so whenever we do training we can bounce ideas off of each other,” Connolly said. “You try and do training at the battalion level when you’re the only EWO or there’s only two, you don’t get much discussion.”

Looking forward, members of the newly consolidated EW teams are planning to further prove themselves during Dagger brigade’s upcoming Europe rotation and capitalize on their success at NTC.

“It was a big eye opener for the entire brigade to see what we can do when we are all consolidated,” Manglona said. “Before it was just word of mouth, someone was saying it was best that we put everyone together, but after NTC it proved that it was beneficial.”