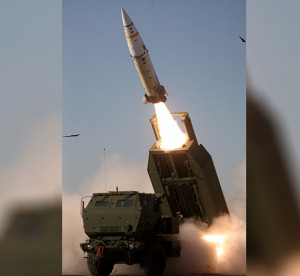 The new M57A1 Army Tactical Missile System missile is being fired over the cab of an M142 High Mobility Artillery Rocket System launcher.

Due to the upcoming DoD cluster munition ban, the Army has been working persistently to provide an accurate and lethal substitute for the legacy Dual Purpose Improved Conventional Munition warhead.

After several months of developmental testing with a unitary warhead and proximity sensor, ATACMS is ready for Soldiers to man the cab of an M270A1 Multiple Launching Rocket System launcher and fire it.

“It’s a real game changer. Similar to when the Rams added Kurt Warner and became the greatest show on turf.”

ATACMS will provide the warfighter with precise effects in all weather, day or night, and is capable of engaging targets with deep strike precision.

“Putting Soldiers in the seats of those launchers gives them firsthand experience,” said Sgt. 1st Class D.L. Green, a research development test and evaluation NCO with the Fires Test Directorate.

“It lets them be party to the development and testing process of their future systems, and it lets them be able to go back to their units and spread the word about what new innovations are coming down the pipe.”

Green looked back on his younger years, when he was able to provide input to a previous operational test.

“I was in one of those seats as a Sergeant. I was really impressed back then. At that point in my career, I had yet to even see a missile pod up close,” he said.

“And then to be able to send one down range and witness the effects on target, it was an eye-opening experience for me.”