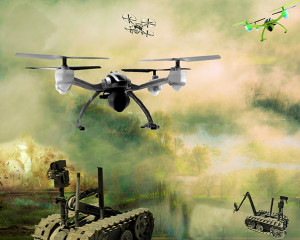 Joint Improvised-Threat Defeat Organization concentrates on defeating IEDs, UAVs and other threats to the force.

On average, there are about 2,500 IED attacks every month worldwide, according to Lt. Col. James McGuyer.

The number of IED attacks, he said, shows that while enemy combatants may not have the sophisticated weapons that are available in the U.S. arsenal, they are adapting, improvising, and improving effective weapons out of locally available materials.

The enemy’s ability to adapt includes efforts to branch out to other means of attack besides the IED, said McGuyer, speaking during Lab Day at the Pentagon last month. McGuyer currently serves as deputy chief for Technology Strategy Division, Joint Improvised-Threat Defeat Organization, known as JIDO, at Fort Belvoir, Va.

JIDO is a relatively new organization, formed a little more than a year ago out of the Joint IED Defeat Organization. JIEDDO itself was created in 2006, as coalition forces in Afghanistan and Iraq faced growing dangers from IEDs.

While IEDs are still a threat that JIDO is focusing on, its mission has broadened to include a host of other improvised threats like UAVs, McGuyer said.

JIDO had anticipated such attacks for several years, McGuyer noted. Therefore, the Iraqi army and its coalition partners had the means to counter the UAV threat.

“We look for threats over the horizon as well as current threats,” he said, noting that JIDO aims to stay ahead of the enemy by looking for solutions that can be fielded almost immediately, or at least within a two-year period.

To get solutions out to the field requires close cooperation between government and industry partners, he added. The Defense Innovation Unit Experimental, or DIUx, has been particularly useful in fielding solutions. DIUx taps talent from the technology brainpower of places like Silicon Valley, Boston and Austin. 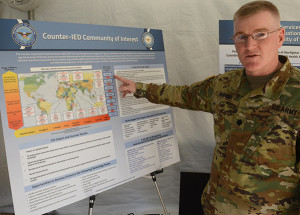 Besides anticipating new challenges, JIDO also focuses on current threats in Iraq, Afghanistan, Syria, and elsewhere, McGuyer noted. One of the main efforts that JIDO oversees in these places is the tracking of materials and methods used for making explosive devices.

For example, there are signatures for the wires, triggers, casings and even explosive materials like ammonium nitrate fertilizer, he said. Tracking the source can lead to cutting off the supplies and perhaps even locating the funding sources and perpetrators. JIDO shares that information with the combatant commanders and with the friendly governments.

Beyond locating such malicious hardware, the JIDO also focuses on destroying such devices. Robots have served as particularly useful tools in defusing and detonating explosive devices, so that humans do not have to risk going into harm’s way.

And finally, another important mission of JIDO is ensuring that U.S. and partner forces are trained to recognize and avoid threats in the first place, he said.

How effective has JIDO been in accomplishing its missions?

McGuyer said it’s impossible to measure effectiveness in lives saved because much of the work is preventative in nature, such as training, detecting improvised threats and neutralizing them. But he hazarded a guess that “JIDO has saved a countless number of lives.”