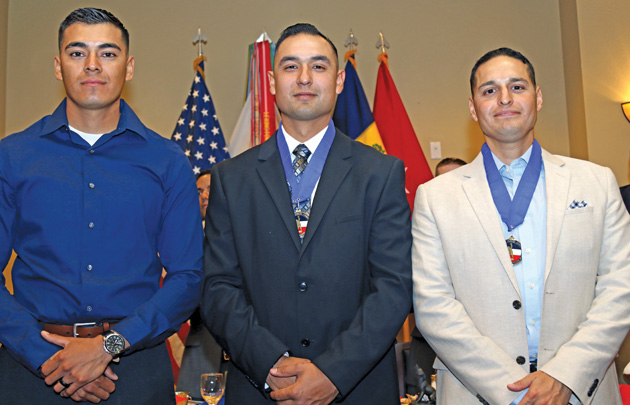 FORT IRWIN, Calif. — The 15th Sgt. Maj. of the Army (SMA), Daniel A. Dailey, along with Soldiers, family members and civilians gathered at Sandy Basin Community Center to recognize excellence in 2016’s National Training Center (NTC) and U.S. Army Forces Command (FORSCOM) Non-Commissioned Officer (NCO) of the Year and Soldier of the Year during a banquet, June 7.

There were over 300 in attendance who spent the evening socializing and watching highlights of the competition held at NTC, during a banquet to award three Soldiers.  Those Soldiers were; Sgt. Alan D. Ibarra-Lepe, NTC and FORSCOM Soldier of the Year, Sgt. (P) Eric A. Cano, NTC NCO of the Year and Staff Sgt. (P) Joseph Gonzalez, FORSCOM NCO of the Year.

“We often forget to take the time to recognize excellence and tonight we will recognize three young men,” commented Dailey, “This is more than a dinner at the National Training Center.  It’s Soldier not just being Soldiers, but trying to be the best Soldiers they possibly can.  We spend a lot of time on Soldiers that are doing the opposite and we often forget about the great Soldiers that we have that work so hard to make us feel so proud about being their leaders and that’s what these three NCO have done.”

The NCO and Soldier of the Year competition at NTC is conducted in order to identify and recognize outstanding NCOs and Soldiers.  Many events were thrown at them to see how the competitors adapted to test them mentally and physically in an effort to show their character and what they are made of.

“The most challenging aspect was not knowing what event to prepare yourself for or what you were going to do.  You just had to accept that you did not know, show up with your A-game and perform as best as you could,” said Gonzalez, FORSCOM NCO of the Year.

“Your performance and professionalism bring great credit upon this organization, NTC, as well as FORSCOM, and I can tell you first hand it does for the United States Army.  So to each one of you thank you for what you do every day as Soldiers,” Dailey said in closing.

2017 NCO and Soldier of the Year competition will commence early August.  The community is invited to attend the closing ceremony on August 3, from 11:30 a.m. to 12:00 p.m., at the blue track on the corner of Inner Loop and Barstow Road.

Carter urges troops to build on momentum in Iraq, Syria