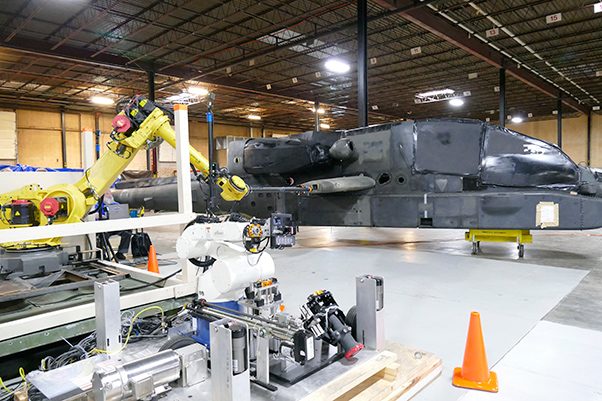 Could a robotic, unmanned refueling system limit rotary-wing aircraft time on the ground and remove Soldiers from isolated fueling stations?

A Limited Initial Capabilities Demonstration was performed by the U.S. Army Aviation and Missile Research, Development and Engineering Center to test that theory.

The demonstration unveiled a new science and technology, or S&T, effort designed by the Center’s Aviation Development Directorate and Operational Energy Lab called Autonomous & Robotic Remote Refueling Point, or AR3P. The event presented stakeholders with a potential material set of solutions, proof of concept, and demonstrated the technical feasibility of an autonomous robot refueling operation.

The project’s goal is to enable Army Aviation manned rotary-wing aircraft to address current and emerging range and endurance requirements, as well as refueling challenges created by the non-contiguous battlefield. By using self-aligning robotics, articulated arms and sensors, the system would support a Quick Hook-Up, ultimately reducing the aircraft’s time on the ground. The robotic, unmanned system would also increase safety by removing Soldiers from the fueling station — a location that could put them at risk of enemy targeting.

“One of the most useful activities of the S&T enterprise is to conduct concept demonstrations like the AR3P,” said Layne Merritt AMRDEC’s chief engineer for Aviation Development. “For relatively little investment, we can demonstrate the technical viability of a new concept like unmanned or unattended Forward Area Refueling Point operations and at the same time identify possible challenges and considerations that would need to be addressed in a full S&T or acquisition program.”

A majority of the robotic package comes from commercial off-the-shelf materials, but the fuel port system is an AMRDEC-designed solution. Use of additive manufacturing assisted in the rapid prototyping of this S&T project.

“It makes sense for us to fill this need,” said AR3P Project Lead, Will Nikonchuk. “We address target acquisition and engagement all of the time as the aviation and missile research and development community. That is what AR3P does.”

Nikonchuk reported at the demonstration that the project is currently addressing Technical Risk areas in Phase 2 and hopes to establish a framework for future funding. Phase 3 includes aircraft modification and flight testing of a Mosquito Test aircraft, while the final, Phase 4 will feature a flight test of an Apache AH-64 at the Aviation Applied Technology Directorate at Fort Eustis, Va.