When Lt. Gen. Sean B. MacFarland left Afghanistan in 2013, he said he remembers troops there had an expectation that medevac helicopters would evacuate the wounded within the so-called “golden hour” — a time period identified by medical professionals as the hour after an injury during which prompt treatment by doctors can often mean the difference between life and death.

In the next fight, particularly against a near-peer adversary, MacFarland said, there likely won’t be a golden hour. Instead, it may take much longer to get medevac missions underway, particularly during the early entry phase against an entrenched enemy, known as an anti-access, area denial operation, or A2AD.

MacFarland, who serves now as the deputy commander of the U.S. Army Training and Doctrine Command, spoke July 24 during a medical symposium hosted by the Association of the United States Army in San Antonio, Texas.

Because Apache attack helicopters will be needed for the fight, they likely won’t be available to serve s escorts for HH-60M Black Hawk medical evacuation helicopters, MacFarland explained. And the air superiority the U.S. has enjoyed for so long may also no longer be a guarantee in future warfare scenarios.

Additionally, telemedicine links between medics and doctors might not work because enemy cyberattacks could disrupt those communications, he said. Even if medevac flights are possible, there is no guarantee that medical centers will still be available, especially since in recent years adversaries have targeted hospitals.

During A2AD, the best way to save lives would be to defeat the enemy first with all means necessary, he said.

Solutions to urgent care
If immediate medical care by doctors is not available, medics and even non-medic Soldiers will “need every tool to provide medical care at the point of injury,” MacFarland said. The U.S. military is already working on a number of solutions when medevac is not an option.

The Marine Corps is experimenting with unmanned aerial systems that could drop needed medical supplies, he said. The Army is interested in this new technology as well.

Training ordinary Soldiers for duties normally performed by medics may be the best immediate option, MacFarland noted. Training kits known as Tactical Combat Casualty Care, or TC3, are already being sent out to select brigade combat teams, he said. 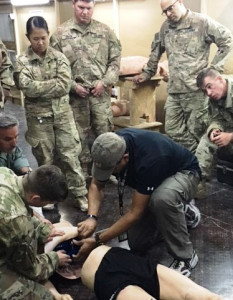 Soldiers at Camp Buehring, Kuwait, receive training on a mannequin that is part of the Army’s new Tactical Combat Casualty Care kit. Similar training will help Soldiers and medics throughout the Army save lives on the battlefield, according to medical personnel.

TC3 kits contain mannequins that mimic human breathing, bleeding, pulses and traumatic amputations. With the kits, three medics can train up to a 30-man platoon of Soldiers on common medical tasks such as clearing airways, controlling hemorrhages, and identifying and rendering aid to chest decompressions.

Another approach is that combat support hospitals may need to reorganize into smaller, more dispersed modular units so they become less of a target, he said.

Maj. Gen. Paul J. LaCamera, deputy commander of XVIII Airborne Corps, said Soldiers need to be toughened in a physical, mental and spiritual sense before they go to the fight. He added that the hardening goes beyond what’s often referred to as “resilience.” Instead, “warrior-athletes” is a term that is more fitting.

While combat training center rotations are generally good for training, LaCamera said he believes that a better way to train medical personnel is to send them to actual trauma surgery centers, like the ones in Honduras.

As for medics and Soldiers who are not in medicine, he said it might prove useful to send them out with paramedics. A number of years ago, Soldiers went with paramedics in New York City, where they witnessed injuries from gunshot wounds.

LaCamera said it’s difficult to simulate the real trauma of war, and the closest one can come to the intensity of conflict is being around people who deal with trauma on a recurring basis.

Finally, one of the most important things the Army can do is to brace Soldiers for the coming fight, MacFarland said. Soldiers must know that they “must care for each other” as the first line of aid for one another before medical help arrives.

Photos with Santa & the Grinch