In the next 18 months or so, the Army expects to field two new systems to dismounted Soldiers that will allow for more rapid acquisition of targets, even those hidden by darkness, smoke or fog.

First out of the gate will be the Enhanced Night Vision Goggle III, expected to be fielded sometime between April and June of 2018.
Shortly after, the Army hopes to field the Family of Weapons Sights – Individual, between January and March of 2019.

The FWS-I and ENVG III are unique in that the FWS-I, which would be mounted on a Soldier’s weapon, wirelessly transmits its sight picture to the ENVG III, which a Soldier wears on his helmet.

Additionally, the ENVG combines thermal imaging with more common night vision image intensification technology, which is recognizable by the green image it creates.

Under starlight, targets may blend in with the background. But with the thermal capability overlaid on night vision, targets can’t hide in smoke or fog. They “really pop out with that contrast,” said Dean Kissinger, an electronics engineer who is currently assigned to Program Product Manger Soldier Maneuver Sensors at Program Executive Office Soldier at Fort Belvoir, Va.

Lt. Col. Anthony Douglas, who serves as product manager for Soldier Maneuver Sensors at PEO Soldier, said the two sensors have benefits beyond helping dismounted Soldiers better visualize targets. By paring the two systems wirelessly — allowing what the weapon-mounted sight is seeing to be beamed directly to the Soldier’s eye — these systems also help the Soldier acquire a target faster. 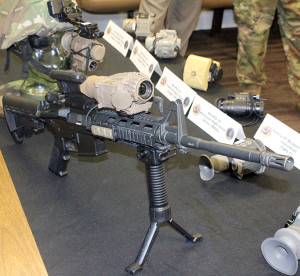 An Enhanced Night Vision Goggle III is mounted on a glass skull, and a Family of Weapons Sights-Individual is mounted on an M4 rifle, at Fort Belvoir, Va. The ENVG III, worn on the head, can be paired wirelessly with a FWS-I, which would be mounted on a weapon, to allow Soldiers to see in their eye what the weapon sight is seeing. The Soldier would not need to shoulder the weapon to see through the sight. Both the ENVG III and the FWS-I are slated to be fielded in the next 18 months.

Master Sgt. Lashon Wilson, the senior enlisted advisor for product manager Soldier Maneuver Sensors, explained how the system will work and make it easier for a Soldier to acquire a target.

“This weapon-mounted system talks wirelessly to the smart battery pack that is on the Soldier’s head, that then transmits a signal to the ENVG III, which now displays a reticle onto the Soldier’s optic,” Wilson explained. “So now what this does is, while the Soldier is on patrol and he has his ENVG III on and he is looking, he has a greater field of view of what is going on in the battlefield.”

In another mode, however, if the FWS-I on the rifle and the ENVG III on the Soldier’s helmet are both pointed in the same direction and seeing essentially the same thing, then the image from the FWS-I can project a reticle into the goggle. The Soldier can see the full image of what his goggle normally sees, but a circle representing the reticle from the FWS-I is overlaid onto that image, letting the Soldier know where his rifle is pointed. What this means is the Soldier doesn’t need to actually shoulder his weapon to acquire a target. That saves time for the Soldier in acquiring that target.

“We are saving him three to five seconds, and increasing their situational awareness on the battlefield,” Douglas said.

Additionally, because the reticle is projected onto what the Soldier is already seeing in his goggle — a much wider view of his environment than what he would see if he looked through his rifle scope — he is able to acquire a target while maintaining situational awareness of what else is going on around him. 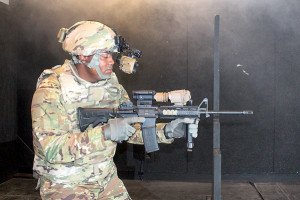 Several man-shaped targets were spaced out in the firing lane, each equipped with thermal blankets to simulate body heat. A pair of fog machines simulated battlefield smoke to make it difficult to acquire those targets using only day optics. Using night vision goggles alone, some of the targets could not be seen. But when combined with the thermal imaging capabilities built into the ENVG III and FWS-I, those targets were easily visible.

Using the system proved a bit challenging, however. When looking through the goggle, which was at one point displaying the image transmitted from the rifle-mounted FWS-I, it was hard to tell if it was the helmet that was crooked, the ENVG III that was crooked, or the shooter’s own head that wasn’t on quite straight.

“The gun is tilted,” Wilson confirmed. He served as a trainer for members of the press who were allowed to shoot.

Maj. Kevin Smith, who serves as the assistant product manager for FWS-I, said there is a “steep learning curve,” for the system.

“We just got through with the tests with the 4th Infantry Division out of Fort Carson, Colorado, back in June,” he said. “We only spent about 40 hours of in-classroom training. But we also spent about a week on the range or so. That’s where the Soldiers were really starting to get it and understand it and feel it, on the range.”

Smith said one such training event was held at Fort Carson, and two were held at Joint Base Lewis-McChord, Wash.

“Once they get comfortable with it, they really love it,” Smith said. “One Soldier, a noncommissioned officer who didn’t like it at first, later on during the last test we did, asked me when are we getting this fielded. He said he wanted it now. They want to take them to war and they want to use them.”

A family of sights
The soon-to-field FWS-I is meant for the M4 and M16 rifles, and can mount on those rifles in front of day sights that have already been bore-sighted, Kissinger said. What this means is that Soldiers can pop the FWS-I onto and off of their rifle without having to remove their day sights first. 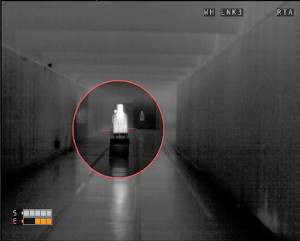 A shooter fires on a target at a Fort Belvoir, Va., firing range, July 27, 2017, using an Enhanced Night Vision Goggle III on his helmet, and a Family of Weapons Sights-Individual on an M4 rifle. Here, the combined video feed from both the sight and the goggle puts the reticle from the weapon onto the video feed the shooter is seeing in his goggle.

The FWS-I will also work with the M249 Squad Automatic Weapon, the M141 Bunker Defeat Munition, and the M136 AT4 Light Anti-Tank Weapon.

More capability is also coming to this “family” of weapons sights, Douglas said. There will be a crew-served variant and a sniper variant as well. Both are still under development, he said.

Both the FWS-I and the ENVG III are currently in low-rate initial production. The Army hopes to buy 36,000 of the FWS-I, and about 64,000 of the ENVG III, Smith said. He also said that the new gear is targeted squarely at dismounted Soldiers with infantry brigade combat teams and special operations forces.

For now, he said, he expects it will be squad leaders and two team leaders within a squad that might first see the FWS-I.