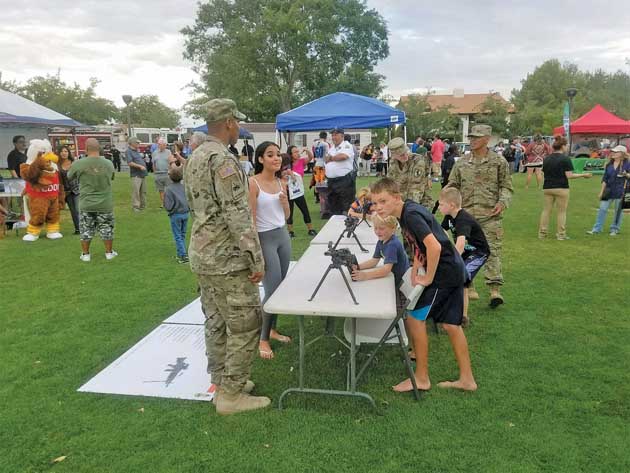 On Aug 1, Soldiers from the 11th Armored Cavalry Regiment supported National Night Out in the community of Helendale, Calif. Held the first Tuesday of every August, National Night Out events bring awareness to police programs and other anti-crime efforts. National Night Out is an annual community-building campaign that promotes police-community partnerships and neighborhood camaraderie to make our neighborhoods safer, more caring places to live. It enhances the relationship between neighbors and law enforcement while bringing back a true sense of community. Furthermore, it provides a great opportunity to bring police and neighbors together under positive circumstances.

There were numerous safety booths and educational displays set up by the Sheriff and fire department as well as the California Highway Patrol. Free hotdogs were given out by the Boy Scouts and local talent performed for the crowd.

Since the National Association of Town Watch established National Night Out in 1984, thousands of communities across the United States have held their own annual event each year.

The National Night Out events are typically organized by various nonprofit organizations and police departments.

While the National Night Out events can be as small as a backyard party, some states have been known to throw full-blown festivals.