A popular trend has begun to take hold within the Fort Irwin community this year in the form of painting rocks and placing them throughout the community for a random pedestrian to find. The movement has one goal, to promote random acts of kindness to unsuspecting community members.

The act of painting rocks and leaving them for a passerby is nothing new. The grass roots project has swept the entire nation and parts of the world. It all began with the “The Kindness Rocks Project,” initiated by Megan Murphy, a women’s empowerment coach.

After finding a sharpie pen one morning, the movement really took off. She dropped five rocks on the beach that day with messages of encouragement for others to find. Later that evening, she received a picture of one of her rocks in a text message from a friend asking if she had dropped the rock, “I think she may have recognized my hand writing and knew I walked that same beach every day, but when she texted that picture to me I said ‘No, I don’t know what you’re talking about, but that’s really cool,’” her friend replied, “well if you did drop this rock, it really made my day,” said Murphy.

Realizing the affect it had on one person, Murphy stepped up her rock painting and added social media, a website and encouraged others to join her Kindness Rocks Project.

Megan Murphy’s story can be viewed at

The trend of leaving little messages of thoughtfulness has continued and recently gained popularity on Fort Irwin after Melissa Nettles, Fort Irwin Army Spouse and Video Blogger, started a painted rock scavenger hunt through her Facebook and Youtube account, which she announced on a local Facebook group called Fort Irwin connections.

“I started out by painting 15 rocks and hiding them throughout the community, it took me about a week and four hours a night to paint them, but it just started as something to do,” said Nettles.

She described the activity as a productive fun family thing to do, which brings the community together and just makes people happy. Nettles say’s if you want to carry on the act of kindness “Paint something that is appropriate, don’t ruin it for everyone and go hide them. If you find a rock and want to keep it, paint one to replace it, or hide the rock again to keep the game going,” say’s Nettles.

“We finally found our first rock! We were out placing another rock that we painted and came across one that someone else painted. My son was SO excited! I love that he is asking to go climb Blackie or walk to town center to hide painted rocks! I think I would call this #Irwinning! #FortIrwinRocks #IrwinRocks,” said Sandy Sanderson, who shared her photo of her find on Fort Irwin connections.

To date there have been around 70 pictures of painted rocks posted by Fort Irwin community members on the Fort Irwin Rocks Facebook page in the last eight months. Nettles hopes the trend continues, “Paint a bunch of rocks, I really hope to see a lot of people get involve in the community and having fun!”

Melissa Nettles, also known as “Tattoo Barbie,” can be seen at https://www.youtube.com/watch?v=ByV_aqb8Dww 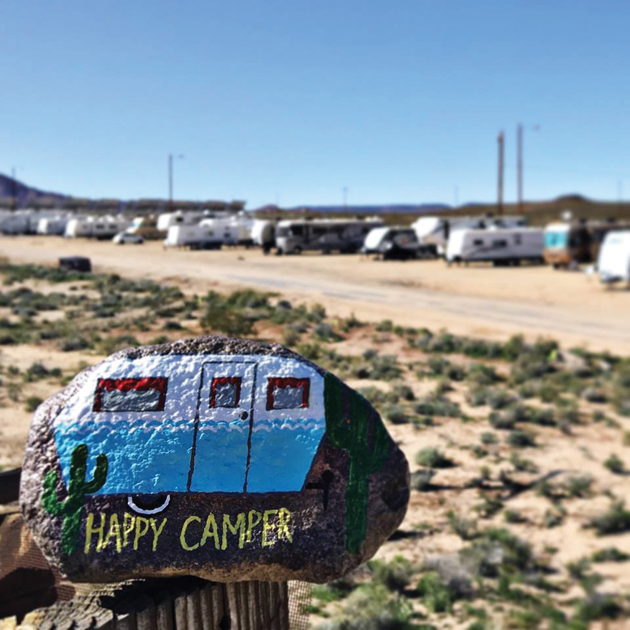 Located at the Fort Irwin Campground. The “Happy Camper.”