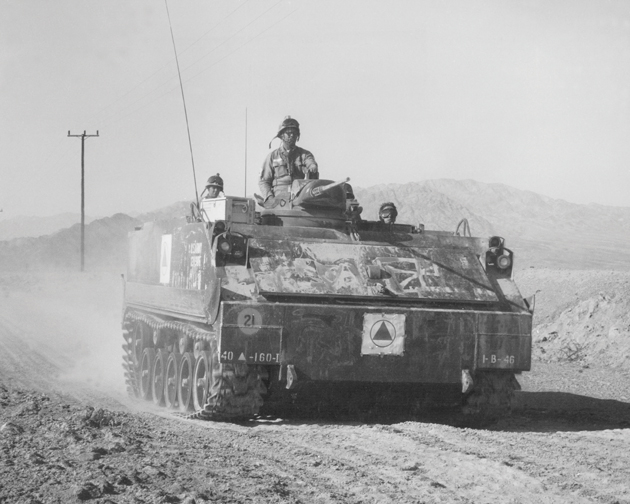 Editor’s Note: This is part two in a series chronicling the history Fort Irwin and the creation of the National Training Center.

Until the 1960’s, the U.S. Army presence in the Mojave Desert was considered a temporary solution. Camp Irwin was activated and deactivated as needed for training. The Mojave Anti-Aircraft Range and the Army Armor and Desert Training Center were used by Soldiers stationed at Camp Haan for training on crew-served weapons, artillery and armored vehicles.

In 1960, the Cold War was in full swing. The Korean War had ended, not with victory, but with an uneasy armistice that left combatants watching each other over an imaginary line. Nikita Khrushchev had consolidated power in the Soviet Union and made no secret of his plans for the West. “Whether you like it or not, history is on our side. We will bury you,” he told Western ambassadors at the Polish embassy in Moscow.

The Army was preparing for the worst, the possibility of open conflict with communist forces in Europe. It was apparent that the AADTC was going to be needed for a long time. After operating as a temporary facility since 1941, Camp Irwin became a permanent U.S. Army facility on Aug. 1, 1961, and the name was changed to Fort Irwin.

Fort Irwin was the perfect place for the Army to conduct large scale tank training. The 1960’s Fort Irwin guidebook described the value and ruggedness of the AADTC.

“This training mecca for tankers presents a cross section of terrain that offers a sample of every natural topographical feature to be found in the battle fields of the world. The rugged land consists of flat desert abruptly rising to steep mountains, extreme temperature readings between 130 and 25 degrees, all in all a formidable testing ground for the metal of armor and the mettle of man,” the guidebook said.

2nd Brigade, 40th Armored Division, part of Task Force Mojave, drew all their equipment from the Fort Irwin Con-Site. Fort Irwin also supported the units of the active Army with logistics and repair support. After the dust settled, it took the mechanics of Fort Irwin more than eight months to recover all the disabled vehicles.

The focus of Fort Irwin in the 1960’s was to prepare units to deploy to Vietnam. The units that called the post home in the early 1960’s were; the 2nd Battalion, 34th Armor, 4th Infantry Division, the 53rd Transportation Company, the 378th and 526 Ordnance Companies, the 586 Signal Support Company and the 433 Army Band.

The tradition of painting a rock with unit distinct insignia also started in the 1967 when the 36th Engineer Battalion painted their Seahorse Patch on the Painted Rocks before they deployed to Vietnam.

As the 1960’s came to a close, the civil rights movement had produced five new federal laws, anti-war protests were becoming more common in the big cities, America was changing. And the Army was preparing for more changes at the remote post in the Mojave Desert.