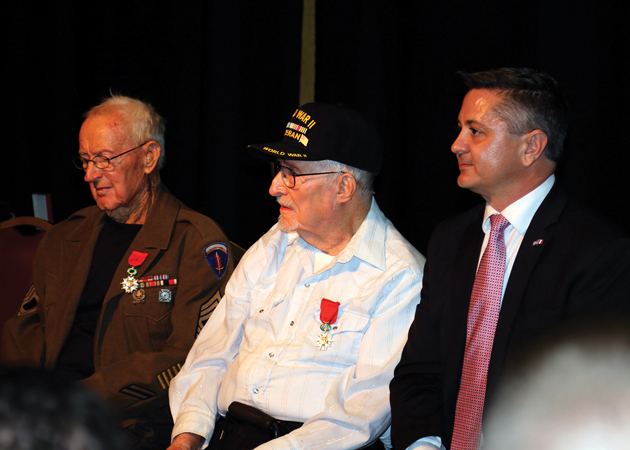 U.S. Army Veterans Master Sgt. Lyle Wells and Pfc. Vernon Fulcher were presented with the French Legion of Honor Medal by Eric Auger, a representative for the Consulate General of the French Republic in Los Angeles.

Both veterans were recognized for their contributions to the liberation of France from Nazi Germany in 1944.

Wells served with the 1st Maintenance Platoon of the 581st Engineer Field Maintenance Company and landed on Omaha Beach three days after the initial invasion. He served in Saint-Lo and Cherbourg where he helped build pontoon bridges.

After the war Wells remained in the Army service in a grave registration company. He would travel from town to town, searching for the hasty graves of allied soldiers. The remains would be moved and be reinterred with military honors.

Wells was accompanied on his travels by a Belgium interpreter, Antoinette. He and Antoinette would marry in February 1946.

After leaving Europe, the couple settled in Las Vegas where Wells had a long career in the paving industry.

Fulcher served with the 358th Engineer Service Regiment and helped build pipelines across France to bring fuel to the Allied front lines.

He would later serve in Antwerp, Belgium. His unit, along with units of the British Army worked to rebuild the port and dredge the canals necessary for resupply of the Army.

On Dec. 16, he watched as a German V-2 rocket exploded after striking a movie theater, killing 367 people, including over 100 Americans.

Fulcher assisted in the recovery of the bodies of the victims, the final remains removed from the wreckage six days after the attack.

Fulcher returned to the United States and found work as a mechanic, eventually opening his own transmission shop. He retired after selling the shop in 1993.

The 45-minute ceremony included the national anthems of both the United States and France, guest speakers, patriotic music and concluded with the playing of taps and a moment of silence.

Keynote speaker, Holocaust survivor Stephen Nasser spoke of the importance of recognizing the service and sacrifice of all our military veterans. “Me, as a Holocaust survivor, I would not be here if not for these great people,” he said. “I have to salute the American heroes, past and present, the ones who are alive and the ones who are watching us.”

5 common mistakes when dealing with FLIPLS

Listening to the community