At a small airfield near the nation’s capital, an innovative group of engineers is designing and building futuristic aircraft that are catching the attention of Army researchers.

“The things that Aurora knows how to do in aircraft, aerodynamics, aviation propulsion are a really good fit to the Army’s needs in terms of performance, range, payload, those kinds of performance characteristics that the Army needs,” said Dr. John Wissler, director of advanced projects at Aurora.

The Army hopes to achieve high-speed, high-endurance and high-payload capabilities for vertical lift platforms. To achieve those goals, the researchers said they are interested in building a collaborative relationship with Aurora.

The DOD has already invested funding in Aurora’s unique technologies. In 2016, the Defense Advanced Research Projects Agency, or DARPA, awarded Aurora a contract to build a prototype of its LightningStrike aircraft, an unmanned, hybrid propulsion aircraft capable of vertical take-off and landing.

The “unorthodox unmanned aircraft would push the limits of technology to combine plane-like speed and helicopter-like agility into one breakthrough vehicle,” according to the DARPA website. 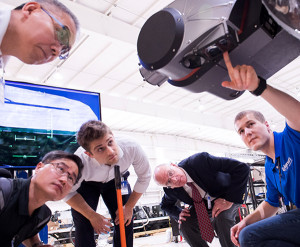 “It’s going to fundamentally change how we look at rotorcraft,” said Dr. Rajneesh Singh, an acting division chief in the laboratory’s Vehicle Technology Directorate. “In addition to its very innovative, unique design, it has several subsystem technologies that in themselves would lead to huge performance gains even for traditional rotorcraft.”

Singh said Aurora has developed an “out-of-the-box solution to overcome the challenges of vertical flight platforms.”

The Army engineers also saw another Aurora project for the U.S. Navy and Marine Corps designed to create an autonomous flight system that can be retrofitted to existing aircraft. The system would give a Marine on the ground “the ability to request a supply delivery via helicopter, which flies to their location with minimal human assistance and autonomously land in an austere, possibly hostile landing zone,” according to Aurora officials.

“This was sort of a follow-up visit for us to find out a little more about their programs as well as to see some of the projects they have been carrying out.”

Singh said the next step is to explore a CRADA, or cooperative research and development agreement, which is an agreement between a government agency and a private company to work together on R&D.

The two organizations hope to move forward on the partnership. After initial discussions, Aurora provided white papers for the Army to review. 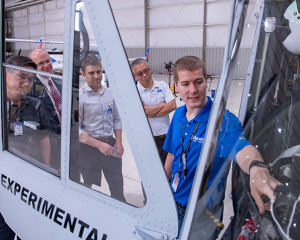 Army researchers learn about the Autonomous Aerial Cargo/Utility System, or AACUS, an innovative autonomous helicopter program from Aurora Flight Sciences from Fritz Langford (right) Aug. 15, 2017, during a tour of their Manassas, Va., facilities.

“We’ll identify individual areas for each party to contribute and then develop a CRADA mechanism to identify individual responsibilities,” Singh said. “We’ll work together to create a plan to continue advancing the work that has been done with the significant DOD investment.”

The laboratory’s “Open Campus” business model enables researchers to build bridges to industry and academia. It builds the “framework for a global science and technology ecosystem to foster an agile, efficient, and effective research environment supporting the continuous flow of people and ideas to ensure transformative scientific discovery, innovation, and technology transition beneficial to national security,” according to the lab’s Open Campus website.

“Collaboration is really key to make big impacts these days as the challenges are huge [and] resources are limited, and I’m quite positive that a really fruitful partnership will be established and will jointly make advancements in these different technology areas,” Singh said.