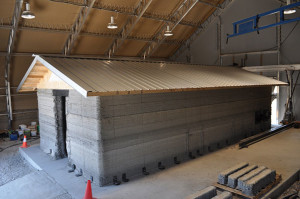 A barracks hut constructed with the Automated Construction of Expeditionary Structures is a new construction technology that prints concrete structures. The printer reduces building materials shipped by half and construction manpower requirements by 62 percent when compared to expedient plywood construction in overseas military construction. This hut resides at the Construction Engineering Research Laboratory in Champaign, Ill.

The structure, called a barracks hut or B-Hut, was printed as a result of a three year Army Program called the “Automated Construction of Expeditionary Structures.” It uses an additive manufacturing process to “print” semi-permanent structures in a theater of operation. The ability to use concrete sourced from readily available materials reduces logistical requirements for the U.S. Army.

ACES has the potential to reduce building materials shipped by half and reduce construction manpower requirements by 62 percent when compared to expedient plywood construction.

CERL has also teamed with NASA to make ACES technology more mobile. NASA designed and built a dry goods delivery batching system that was used to print the B-Hut. CERL is currently working with NASA to design, build and test a third generation concrete printer that will be delivered in September 2017. NASA plans to explore additive construction of extraterrestrial infrastructure in the future.

ERDC has also established a Cooperative Research and Development Agreement with Caterpillar Inc. to explore commercialization of ACES technology, with the potential application for disaster relief operations and conventional construction.

“The ACES team designed, built, and validated an additive, three-dimensional concrete printing technology that is a real game changer,” said Case. “Unlike previous efforts, ACES can use up to 3/8″ aggregate in the concrete that is used. In addition, the ACES project paid particular attention to methods of reinforcing printed concrete, both horizontally and vertically.”

CERL is an integral component of the U.S. Army Engineer Research and Development Center, headquartered in Vicksburg, Miss.