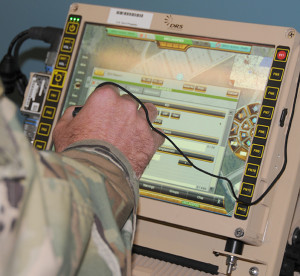 A Soldier uses the capabilities of the Joint Battle Command-Platform inside a combat vehicle. Recognizing high demand for the systems and significant impact on operations, Army Forces Command requested an accelerated pace to reach all Active, Reserve and National Guard units with completion no later than 2024, two years ahead of the initial timeline.

Recognizing high demand for the systems and significant impact on operations, Army Forces Command requested an accelerated pace to reach all active, Reserve and National Guard units with completion no later than 2024, two years ahead of the initial timeline.

By 2024, units will be synchronized with the same upgraded software called Joint Battle Command-Platform, and the Army’s new standardized tactical computer, known as the Mounted Family of Computing System. The combined capabilities of JBC-P and MFoCS deliver the Army’s next-generation friendly force tracking system.

“The most recent developments in the system — ease of use and high reliability — are aimed at enhancing the qualities that JBC-P and MFoCS are known for throughout the Army,” said Lt. Col. Shane Sims, product manager for JBC-P, assigned to Project Mission Command. “The Army needs newer and more robust hardware to support future software upgrades. Getting this to Soldiers faster will pave the modernization path for the Army’s Mounted Computing Environment.”

Impetus for faster fielding
There are currently three variants of mounted computing capabilities throughout the Army. The Army first fielded JBC-P in May 2015, which is an upgrade to the Force XXI Battle Command Brigade and Below/Blue Force Tracking system, known as FBCB2/BFT, and Joint Capabilities Release, or JCR. The two latter systems are 15 years old and 10 years old, respectively.

The Army planned to save money by fielding legacy hardware, known as JV-5, to 60 percent of units, and the newer system, MFoCS, would have gone to the remaining units. However, to better support Soldiers, the Army decided to eliminate the use of old hardware entirely. Several factors are driving these decisions: the reduction of software and hardware baselines, improved cyber protection from recent technological advancements, and cost avoidance by eliminating sustainment of older systems.

MFoCS ranges in options from a detachable tablet to a full vehicle-mounted workstation. It can also run additional software inside the vehicles, which reduces size, weight and power demand.

“From an operational perspective, these upgrades are designed to enhance Soldiers’ capabilities for planning and executing their missions,” Sims said. “MFoCS provides these improvements and eliminates the need to operate multiple computers in the same vehicle. “We’re working across Army program offices with the goal of fielding a single tactical computer that is scalable and tailorable to the mission and vehicle.”

The Army’s move to an MFoCS-only fleet will serve as the hardware infrastructure for the MCE, which will provide a common set of applications and services as one of six computing environments that make up the Army’s Common Operating Environment.

Factoring in Soldiers’ training time is also a significant consideration during a large fielding initiative. To help the Army accomplish this expedited timeline, the Army Training and Doctrine Command and PdM JBC-P combined efforts and condensed new equipment training time for Soldiers from 40 hours to 16 hours.

“This is a significant benefit for the Army Reserve and National Guard units that can now complete training over a weekend instead of being called up for an entire week,” Sims said.

Fielding, training plan
JBC-P is part of the Department of the Army G3/5/7’s Unit Set Fielding construct, which works as a unit’s one-stop shop for the management, planning and implementation of fielding and reset. The G3/5/7 will set JBC-P prioritization based on units’ anticipated deployments, exercises and training events, said Ed Lauer, JBC-P platform fielding team lead. Under USF, a unit is defined as a brigade, including its subordinate battalions and companies.

To cut two years from the original plan, PM Mission Command is increasing the size of its training and fielding teams, which are based at Fort Hood, Texas. It is also ramping up procurement of the vehicle hardware and software platforms.

Currently, JBC-P is fielded to 17 units, with 18 additional units slated for fiscal year 2018. The significant build-up will begin in fiscal year 2019, with 50 to 70 units per year to be fielded and trained under the accelerated plan, versus the previous schedule of 30 to 50 units. About 98,000 MFoCS platforms will be in place by 2024.

“Our fielding coordination teams do a lot of work at Fort Hood before we hit the ground. We’re doing hundreds of installations and Soldier trainings for each unit,” Lauer said. “We have to make sure the vehicles are in good, working condition and the proper Soldiers are available and ready to be trained.”

Col. Troy Crosby, project manager for Mission Command, said the decision to accelerate the fielding pace is critical to improve Soldier experience by enabling them to better plan, monitor and execute missions.

“We’re providing a critical capability for Soldiers as the Army retains its technological edge ahead of potential adversaries,” Crosby said.