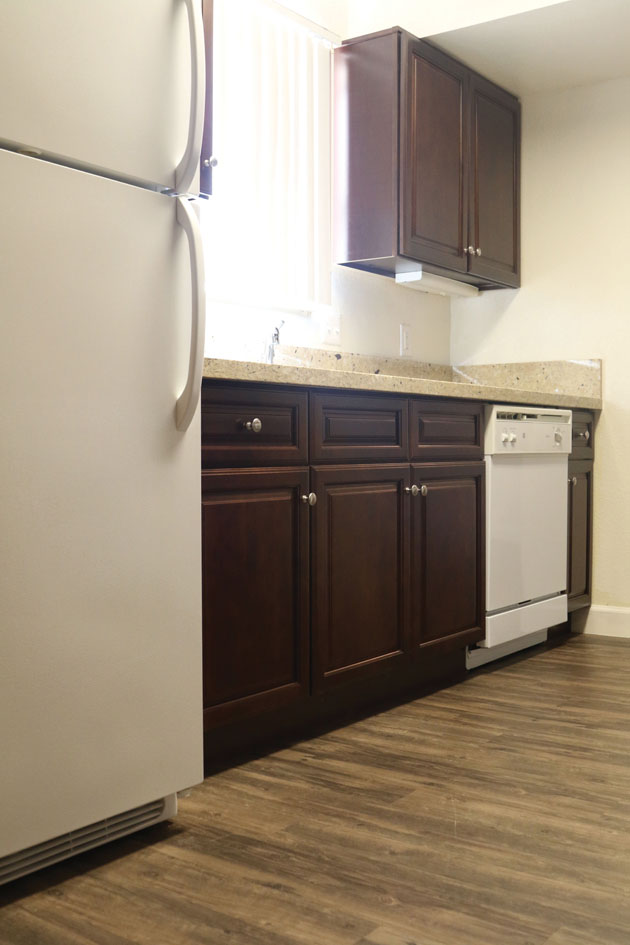 Renovations are underway in some of Fort Irwin’s oldest neighborhoods to create a more pleasing living environment for Soldiers and their families. The upgrades are part of a five-year housing improvement initiative that also includes projects to promote modernization, energy savings, and beautification across all residential communities on post.

Work began earlier this year to update the kitchens, bathrooms and flooring in Coyote Springs, a neighborhood that was originally built in 1983. The upgraded homes have new kitchen cabinets, solid-surface countertops, bathroom vanities, light fixtures and hardware. New plank flooring and updated baseboards are also being installed throughout single-level units and in the downstairs level of two-story units.

The changes are meant to bring Coyote Springs up to par with the installation’s newer neighborhoods, and they have already made a big difference to residents, according to Bill Flannery, facilities director of Michaels Management at Fort Irwin.

“As soon as we get these things done, we have people moving right into them because they really like the way that they look, when [before] we were having troubles getting anybody to move into these units,” he said. “But the upgrades are doing that.”

Contractors are working quickly to turn houses around in just 10 days, and they expect to complete renovations in approximately 40 units this year, said Flannery.  The work will continue over the next five years until all homes in Coyote Springs have been remodeled.

Homes in Coyote Springs and Tiefort are also slated to receive ceiling fans for both the family room and master bedroom. The fans are being installed at a rate of 120 units each year, and work is already complete in the units scheduled to receive fans this year. Ceiling fans are also available by request to residents who live in other neighborhoods, Flannery said. In those areas, the fans and necessary materials are provided for free, but residents are asked to pay the labor costs for their installation.

Additional improvements encompass every neighborhood on post, including the replacement of all air conditioning units. The new units are more efficient, cheaper to operate, and better at cooling houses, according to Flannery. The replacement efforts are focused in the older neighborhoods to start, but are scheduled to proceed at a rate of 432 units each year until all homes have made the switch. However, broken air conditioners are also being replaced as they fail, regardless of location.

The goal of all of these projects – as well as landscaping, playground improvements, and freshly painted exterior doors and trim – is to create a more pleasant community across the board, said Flannery.

Over the past two decades, the U.S. Army’s Residential Communities Initiative has leveraged public-private partnerships to eliminate inadequate family housing at 44 Army installations across the country. The initiative is a key part of the Army’s efforts to promote the well-being of Soldiers and contribute to recruitment, readiness, and retention. At Fort Irwin, housing is developed and managed through private partner Clark Michaels.