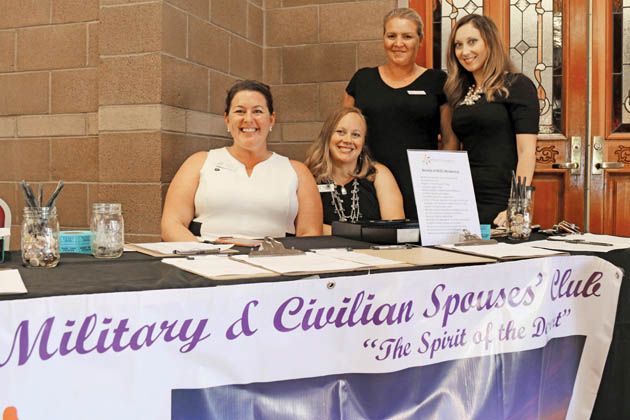 The Military and Civilian Spouses’ Club of Fort Irwin ushered in a new year of club activities at its annual super sign-up event on Aug. 24.

The event, held at Sam Adams, provided spouses with the opportunity to join the club and meet current members, talk with representatives of community organizations, and shop the wares offered by on-post businesses.

The club is open to spouses of service members, DOD civilians, and contractors in the Fort Irwin community, and its main purpose is to raise money to give back to the community, according to club president Michelle Logan. Last year the club raised more than $110,000 that it donated in the form of welfare grants and scholarships. It hosts two major fundraising events each year – a Fall fundraiser that will be held Nov. 4, and a Casino Night fundraiser that will take place March 24.

Club members run the gift shop located in the National Training Center and 11th Armored Cavalry Regiment Museum, which sells local and unit-themed gifts, as well as items crafted by local spouses. They also offer decoration rentals for military balls and parties, and operate the FICA Thrift Store inside the Arts and Crafts building near the Post Exchange.

The club also hosts monthly luncheons between August and May and offers a variety of social “sub-clubs” that are open to members. This year, the sub-clubs include a bunco club, a book club, a movie club, and a coffee club. The sub-clubs hold events in both the mornings and evenings to accommodate members’ schedules.

“I’ve been a military spouse for almost 20 years now. This is the 10th club I’ve joined, and I’ve always felt that the spouses’ club on post is just the best way to meet people, to get out there, do something different, get out of your comfort zone sometimes, and just to have a good time and also give back to the community,” said Logan.

“I think this year we have a lot of new spouses, a lot of younger spouses that are just maybe coming into the Army and learning something different,” she added. “So it’s a great opportunity to get out and meet new people.”

Spouses who missed the super sign-up can still join the club at any time by filling out an online form on the MCSC website, mcscftirwin.org.