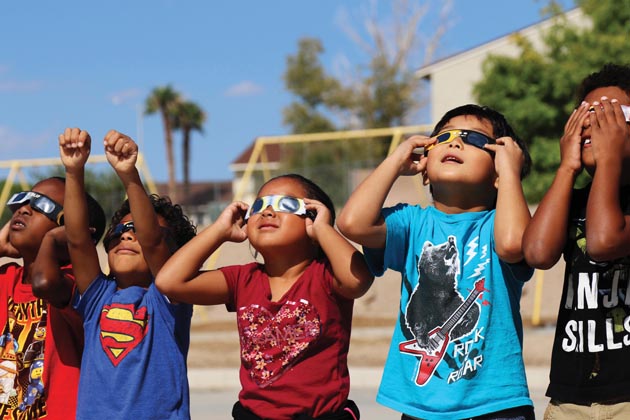 On Aug. 21, students at Lewis Elementary School, part of the Silver Valley Unified School District, joined with the nation to observe the first total solar eclipse visible from the contiguous United States since 1979. A partial eclipse was visible from Fort Irwin, and the students used protective glasses and pinhole cameras to view the event.

Lewis Elementary serves K-2 students and is one of three on-post schools at Fort Irwin. Several first and second grade classes at Lewis viewed the eclipse outside with protective glasses, while other classes watched via Live Stream from their classrooms. Teachers also included mini lessons and activities about the eclipse as part of their classwork.

“The teachers were very eager to provide such a memorable learning experience that students would never forget,” said Taryn Lamoreaux, principal of Lewis Elementary. “It is really fun to see the excitement that came from students knowing that this was a rare event that they got to take part in.”

A solar eclipse occurs when the moon moves between the sun and Earth, blocking the sun. In the 14 states under the path of the 2017 total eclipse, the moon completely blocked the sun for more than two minutes during the day. A partial eclipse, in which the sun is not blocked completely, was visible across all of North America.  The next total solar eclipse to pass over the contiguous United States will occur in 2024, according to NASA.