Scientists at the U.S. Army Research Laboratory observed an unexpected result when combining urine with a newly engineered nano-powder based on aluminum. It instantly releases hydrogen from the urine at much higher rate than with ordinary water.

The research team announced earlier this summer that a nano-galvanic aluminum-based powder they were developing produced pure hydrogen when coming into contact with water. The researchers observed a similar reaction when adding their powder to any liquid containing water.

“What we do as Army scientists is develop materials and technology that will directly benefit the Soldier and enhance their capabilities,” said Dr. Kristopher Darling, an ARL researcher. “We developed a new processing technique to synthesize a material, which spontaneously splits water into hydrogen.”

Hydrogen, the most plentiful element in the universe, has the potential to power fuel cells and provide energy to future Soldiers.

Fuel cells generate electricity quietly, efficiently and without pollution. According to a Department of Energy’s website, fuel cells are “more energy-efficient than combustion engines and the hydrogen used to power them can come from a variety of sources.”

“We have calculated that one kilogram of aluminum powder can produce 220 kilowatts of power in just three minutes,” said Dr. Anit Giri, also an ARL researcher.

In space, astronauts recycle waste water and urine because drinking water is a precious commodity. For Soldiers in austere environments, there are many precious commodities. Power and energy is becoming increasingly important to run communications and electronics gear for away teams, which can’t be resupplied. 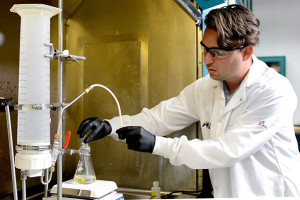 Making use of urine as fuel source may result in tremendous benefits for Soldiers, officials said.

“When we demonstrated it with urine, we saw almost a twofold increase in the reaction rates,” Darling said. “We were very excited. As a group we have been pushing for the last few months on developing the efficiency and the reaction kinetics to try to get them faster.”

The team is still investigating why urine causes a faster reaction, but it may have something to do with the electrolytes and the acidity of the liquid.

“It’s unique because the rate of the reaction is so efficient and extremely rapid from such a small volume of material,” Darling said.

The team is working closely with other researchers at the laboratory, including the Sensors and Electron Devices Directorate, to discover how to harness the material as a potential energy source.

“It was a spontaneous finding,” Darling said. “We weren’t expecting to develop this material specifically for hydrogen production. It was a group effort. We came together as a team to understand the importance of the discovery. This has great potential for benefiting Soldiers.” 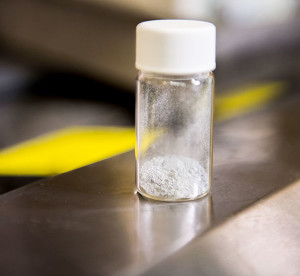 Army scientists and engineers found that a nano-galvanic aluminum-based powder they developed produces hydrogen when added to water or any liquid containing water.

In a statement, Dr. Philip Perconti, the laboratory director, said the discovery “may find great utility for forward deployed troops who need a compact and lightweight energy source.”

In the coming months, the team will continue to investigate and push the limits of the discovery, to try and understand its implications.

“Our basic focus is materials development and optimization,” Darling said. “We’re looking at how we can optimize the composition, its interactions with other fluids, including saliva and other liquids available to Soldiers in a field environment.”

DES meets with youth to talk curfew, being alert in public

Army Futures Command to build on 3 pillars ‘to ensure we can fight and...