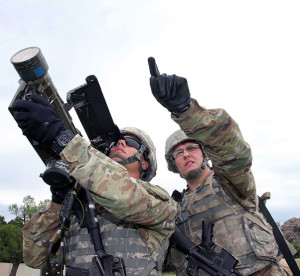 Privates Austin Miller and Ronald Taylor, B Battery, 2nd Battalion, 6th Air Defense Artillery, use a Stinger missile to target a simulated unfriendly aircraft during training May 23, 2017 at Fort Sill’s Camp Eagle. The two, whose military occupational specialty is with Patriot long range missiles, also learned to use short range air defense in the Stinger missile pilot program. SHORAD is a priority for the Army, as spelled out in 2016’s Strategic Portfolio Analysis and Review.

Over the next several months, some 820 equipment programs — including combat vehicles, aircraft, and even gear worn or carried by Soldiers — are expected to be rank ordered by their importance to the Army’s war fighting mission, as a way to determine if the Army is spending its limited resources in the best ways possible.

The Strategic Portfolio Analysis and Review for this year, or SPAR 20, is the second of its kind in recent years. The first was completed earlier this year, in April, to feed the 2019-2023 Program Objective Memorandum. This newest SPAR will in turn feed the 2020-2024 POM.

Other programs that made it onto the list of most-important Army programs were long-range precision fires; munition shortfalls; lethality, mobility and protection of BCT’s; active-protection systems for air and ground systems; assured position navigation and timing; electronic warfare; both offensive and defensive cyber capabilities; assured communications; and vertical lift.

During an early morning forum Sept. 19, Murray announced the kick-off of the latest SPAR.

“Once again we will work through each portfolio to prioritize within that portfolio,” Murray said. The Army’s G-8 expects to again use the SPAR process to identify long-term resourcing strategies for each of the 820 programs in the Army.

Murray said the Army will “look for opportunities where we can take risk to free up resources, by either cancelling programs, (or) scaling down procurement objectives.”

As part of the SPAR process, the Army will put its multitude of competing programs into one of four “buckets,” as it did the first time around, to create a list of recommendations for Army leaders on how limited modernization resources might be applied moving forward. As part of the 2020 SPAR, the Army’s 820 programs will be divided up into four categories:

I: Accelerate or find a way to bring into the portfolio
II: Sustain at current level of resources
III: Reallocate resources to invest elsewhere
IV: Divest most or all resources

This year, the Army will do something differently than what it did last time for the SPAR — which, in 2016, was the first time the Army conducted such a top-down review of its equipment portfolio.

“We will put together an ends, ways and means strategy for certain critical combat systems in order to make sure we understand exactly when we run out of physics, if you will, on incremental upgrades and when the Army must begin to invest in next-generation systems,” Murray said.

Essentially, Murray said, the Army hopes to be able to determine when it’s time to stop investing in incremental upgrades to existing systems — when the payoff for doing that might no longer be worth it — and instead look at entirely new replacement systems.

“When we make that decision, the Army creates risk for itself,” Murray said. “Because to do that, we will have to free up resources and to free up those resources, it has to come from the incremental upgrade, unless the Army’s budget goes up — which I am not expecting.”

Murray was reticent to go into great detail about the future direction of Army modernization. Less than three weeks away, many Army leaders will attend the 2017 Association of the U.S. Army Annual Meeting and Exposition in Washington, D.C. There, it’s expected, the Army’s chief of staff and the acting secretary of the Army — or secretary, if one is confirmed by that time — will be more forthcoming on details for Army modernization. Murray opted to not get out ahead of them. 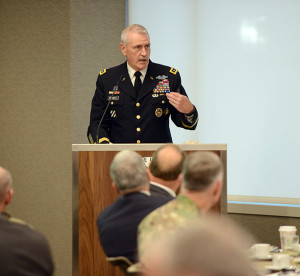 Lt. Gen. John M. Murray, the Army G-8, discusses the Strategic Portfolio and Analysis Review during a presentation Sept. 19, 2017, at the headquarters of the Association of the United States Army.

Instead, he laid out some of what he called personal and professional opinions about the way ahead for modernization.

The Army must also prioritize within its science and technology budget, he added.

“I am convinced that our Army should only be investing in the things that are most important to us, and most likely in only the things that industry is not already heavily invested in,” he said.

The general also said he expects the Army will see increased investment in prototyping of some next-generation combat systems.

“I am also thinking you will see the Army try to put prototypes into the hands of Soldiers as quickly as we possibly can, to gather their input and their feedback, do experimentation, all before we write the requirements documents,” he said.

Murray also said he thinks there will be a desire for more non-developmental solutions that can be rapidly delivered to the field. One recent example is with short-range air defense systems, something the Army has identified as a capability gap for itself. The Army recently held a demonstration of four such existing systems at White Sands Missile Range in New Mexico.

Those four systems already exist, though the Army doesn’t use them. They could quickly be brought into the Army, and delivered to the field, with limited or no modification. That differs from a developmental solution, where the Army may spend years working with a defense contractor to develop a brand-new solution from the ground up.

Finally, the general said, he envisions the Army focusing on sustaining its support fleets, and combat service support fleets as a way to free up resourcing for more critical investments and also, he said, a continued effort “to divest old, obsolete and excess equipment as quickly as we possibly can in order to once again free up resources for higher priorities.”

For Fiscal Year 2017, Murray said, the Army got approximately $26.2 billion for its procurement/research, development, testing and evaluation budget. This year, in the FY18 budget, the Army requested about $26.8 billion, an increase of about $600 million over what it got in FY17. All of that increase, he said, will go to procure munitions to replace consumption rates and a dwindling stockpiles throughout the world.

It is the procurement and RDT&E budget that he says will benefit most from the prioritization provided by the SPAR process.