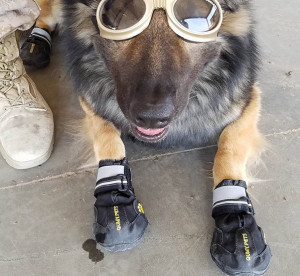 This event afforded 29th Combat Aviation Brigade Soldiers an opportunity to work with U.S. Marines and their nine military working dogs and improve capabilities between the two services.

“Any time you get to integrate other branches of service, in this case Marine K-9 handlers and U.S. Army aviators, it is a success,” said Sgt. Michael Reynolds, a flight medic with Task Force Wraith.

The intent of the training was to get the dogs comfortable around aircraft. In the unfortunate circumstance their handlers become injured, the handlers could be medically evacuated with their military working dogs.

The training not only allowed for the dogs to become comfortable around aircraft, but also gives medics from Task Force Wraith the opportunity to become familiar with the military working dogs and their possible medical needs in the event one may need medical evacuation. 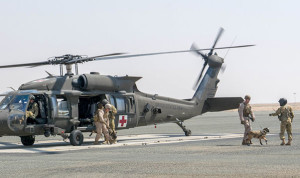 “The best part of the training was integrating on-site Army veterinarians to teach IV access and wound management,” said Reynolds.

For many of the working dogs and their handlers, this isn’t their first flight. Most have at least three prior training experiences with other aircraft.

“Operating with military working dogs in the aviation environment could help in real life situations and it helps knowing how to handle the dogs in a situation that might intimidate them,” said Spc. Alec Brewer, a crew chief assigned to Task Force Wraith.

The military working dogs are trained to perform various tasks to include individual attacks, building searches, and searching for explosives.