After the withdrawal of U.S. Forces in Vietnam in 1974, the U.S. Army found itself in disrepair. For years most Soldiers had been drafted for service, forced to spend two years in one of the military branches or face jail time. To avoid service some Americans fled the country, roughly 150,000 slipping across the northern border into Canada.

Not only was morale low, but the American public’s trust in the Army was at an all-time low. Years of protest against the U.S. involvement in Vietnam and open conflict with the military and police, often on live TV, had turned public opinion against not just the organization, but against men and women in uniform.  Soldiers in uniform in public were sometimes openly despised, called names and even spit on by people who had opposed the war.

As the U.S. began withdrawing troops from Vietnam, President Richard Nixon ordered the end of the draft by 1973. The Army began a program to make military life somewhat more comfortable, in order to entice Americans to serve in an all-volunteer force.

Open bay barracks were divided into sleeping rooms with a common area, known as a a “day room.” For Soldiers to relax in their off-duty hours. Some grooming standards were relaxed, and troops enjoyed more free time.

As military life improved, the efforts of the Army shifted to preparing the force to fight and win the next battles they would face.

Instead of fighting in the jungles of Southeast Asia, the Army began training to return to fight on the open plains of Europe and realized that they needed an installation where they could train full Armored Brigades. Some place with not just the land, but open airspace, free of electronic interference. They found all of that at Fort Irwin.

When the first Soldiers began arriving in 1980, they found a base in disrepair. Most of the few housing units were abandoned for the 10 years that the California National Guard had used the base for summer training. The facilities were usable, but some just barely.

There was a commissary, but it carried very few basic items. One of the biggest problems for families was they couldn’t store milk at the store. The old, worn out refrigeration units failed constantly, and all dairy items would be thrown out. Finally the commissary just stopped trying to stock dairy products.

If the family needed milk, it meant a trip to Barstow, over 35 miles away.

The process for repairing and replacing the decaying infrastructure would take years, but the business of training the Army got under way.

“The living was tough, but the Soldiers understood what it was they were doing and what they were doing was important,” said Maj. Gen. Thomas Cole, second commander of the NTC.

By the mid 1980s training rotations were in full swing. One of the many training innovations at Fort Irwin was the creation of the professional, dedicated Opposing Force, which became the 177th Armored Brigade.

The 177th wore Soviet style uniforms and used specially modified vehicles made to look similar to the Soviet vehicles of the time.

The OPFOR proved to be an incredibly tough opponent for the training forces.

“The opposing force became terribly efficient and there weren’t very many wins by blue force units,” said General Paul Funk, fifth commander of the NTC. “But those people held us all to a higher standard than we had ever been held to before.”

Also introduced into the training was the Multiple Integrated Laser Engagement System, or MILES. The system used lasers to record weapons hits on people and vehicles, greatly enhancing the realism of the training.

President George H.W. Bush acknowledged the success of the training when he visited the installation shortly before he ordered the U.S. military into action after the Iraqi invasion of Kuwait.

“Your work here at the NTC reflects the state of training throughout the Army, demanding, tough, and remember you are, all of you, preparing yourselves for combat and by doing so making a direct and lasting contribution to the preservation of peace,” he said.

The improvement and hard work paid off in early 1991, when the U.S. Army and coalition forces defeated the army of Saddam Hussein in 100 hours of ground combat.

That success was because of the training units received at the National Training Center, according to Funk.

Editor’s Note: This is part four in a series chronicling the history of Fort Irwin and the creation of the National Training Center. 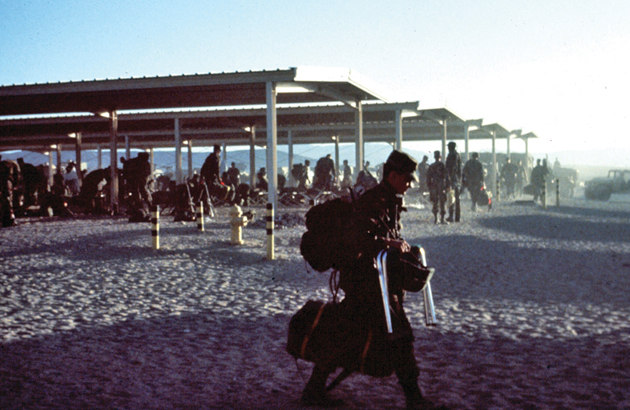 Soldiers from the rotational unit, move their personal gear in the Rotational Unit Bivouac Area or RUBA. The lack of sides on the covers and the prevailing winds caused near constant dust storms in the RUBA. Today it is still known as the “Dust Bowl.” 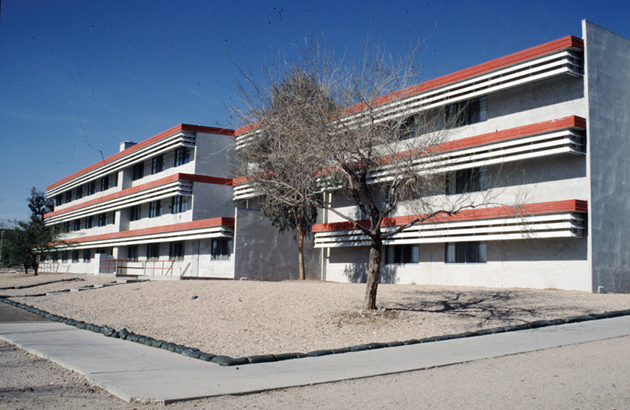 In the 1980’s Fort Irwin benefited from many construction projects to replace aging infrastructure on the installation. The newly finished Pierce Barracks are shown here. 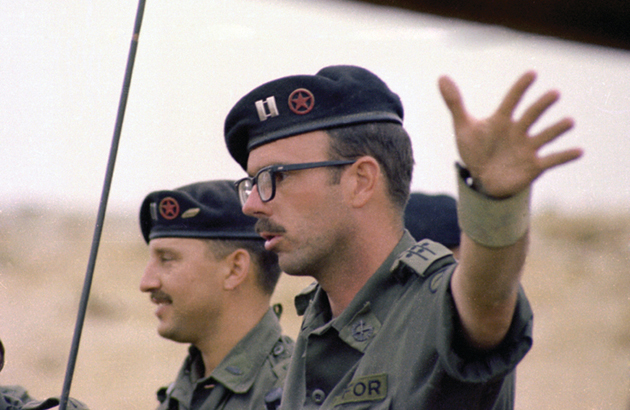 A captain from the Opposing Forces (OPFOR) gives a briefing during a rotation soon after the opening of the NTC. The OPFOR became extremely good at destroying the units participating in training rotations at the NTC.