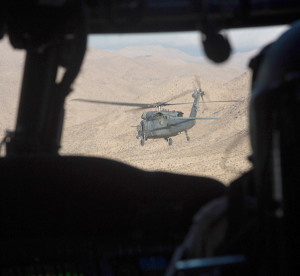 Approximately 80 personnel from the UAE’s Joint Aviation Command arrived at the NTC in August, prepped to train in some of the toughest and most realistic simulated combat scenarios that the rugged, high mountain desert has to offer.

The UAE brought in a small joint aviation task force and embedded with U.S. forces in support of two Stryker brigades in one scenario.

International partnership is a focus for Army leadership and critical for coalition operations, and the UAE has been a reliable ally for decades. With an $18 billion foreign military sales portfolio, including THAAD and Patriot programs, the UAE is the only Gulf nation that deployed with the United States in Afghanistan.

“The UAE really prides itself on being one of our closest Gulf allies in the region,” said Wyatt Wright, UAE country program manager with the U.S. Army Security Assistance Command. “And I think these are some of the indicators; you see the effort on their part to continue building that close relationship.”

USASAC manages more than 5,000 foreign military sales cases with a total value of more than $177 billion in more than 150 nations.

Endres said it is a chief of staff of the Army priority to get not only the UAE, but other CENTCOM partners, to train and operate alongside U.S. Army units.

This rotation supports that, and only increases the UAE’s ability to be an effective partner in real world operations.”