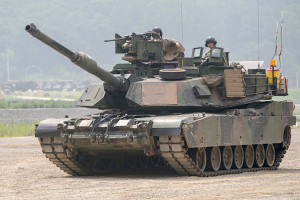 An Abrams tank crew await their iteration during a proficiency qualification table during the 1-9 Cavalry gunnery. The Maneuver Center of Excellence at Fort Benning, Georgia, has provisionally stood up a cross-functional team that is focused on the development of the Army’s Next Generation of Combat Vehicles.

Soldiers today move about in and conduct combat operations from, among other things, the Stryker, the Bradley, or the Abrams tank. But the Army has started work now to determine what will take Soldiers to the fight in 2035 and beyond.

The Maneuver Center of Excellence at Fort Benning, Ga., provisionally stood up a cross-functional team, Aug. 1 that is focused on the development of the Army’s Next Generation of Combat Vehicles.

That team is provisionally chartered to improve the operational capabilities of the Army’s maneuver formations against a peer adversary.

The NGCV is expected to increase overall lethality, tactical mobility, strategic deployability and protection for Soldiers. It is also expected to reduce logistical demands on the Army. All those necessary requirements are in line with expectations laid out by Chief of Staff of the Army Gen. Mark A. Milley, according to sources at the MCoE.

While the hunt is now underway for the next tool to bring Soldiers to the fight, a final solution is still a way off.

“We are very early on in the process,” said Col. Gerald A. Boston, director of the NGCV provisional team. “We will be, on behalf of the Army, bringing multiple communities together and providing the continuity and unity of effort and purpose.”

Well rounded, elusive target
“Is this vehicle an infantry fighting vehicle? Is this vehicle a replacement for the M1 Abrams? Will technology leap ahead to the point where we can do both with one platform?” Boston asked. “We don’t know.”

While Boston said he doesn’t have solid answers to those questions now, he confirmed that it would be his team’s job to find them.

“The purpose of this team is to help make those types of determinations and recommendations to senior leadership going forward,” he said.

The MCOE is assessing what are identified as the four plus one critical enabling technologies for use in the NGCV, according to John W. Miller, who serves as the deputy director of the NGCV provisional team: 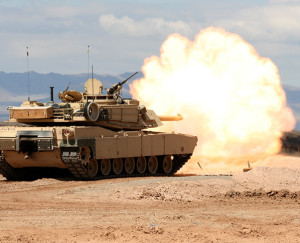 — Directed Energy and Energetics: The potential to incorporate directed energy capabilities while better understanding the operational impacts of the flow and transformation of energy may provide increased lethality while reducing logistical burdens. Incorporating such advancements could mean both reduced logistical burdens to replace expended artillery, and platforms that have significantly improved operational capabilities at significantly smaller sizes.

— Power Generation and Management: The ability to generate sufficient power for all future platform needs is critical to increasing both platform and formation operational range while potentially reducing the use of fossil fuels.

* Advanced Armor Materiel Solutions: The reduction of combat vehicle weight and the potential increase in platform range and accessibility is greatly dependent on our ability to use new or different technology, rather than more and heavier armor which significantly increases platform weight.

* Vehicle Protection Suites: The best protection for crews and their vehicles comes from a combination of passive armor and active protection systems. The Army will work toward determining the correct ratio between armor types that will allow a decrease in vehicle size and weight while simultaneously improving mobility and protection levels against all applicable threats.

* Maneuver robotics and autonomous systems: The Army must continue the development and use of unmanned air and ground systems while creating combat platforms that can be either manned or unmanned based on the dictates of the commander’s tactical assessment.

While these four plus one critical enabling technologies are apparent now, there is no way to predict how they will ultimately shape the capabilities of the NGCV, Boston said.

“We are still in the process of determining what is in the realm of the possible,” Boston added.

A team effort
To help with the development of the NGCV, the team will need to rely on the expertise from the Army’s test and evaluation, research and development, and combat development communities, Boston said. This is in addition to the support provided by the Office of the Assistant Secretary of the Army for Acquisition, Logistics, and Technology, and the U.S. Army Training and Doctrine Command.

Furthermore, the team would also like to leverage the experience of industry partners as early and often as possible, Miller added.

“There will need to be a community of effort moving forward,” said Boston, adding that Soldier feedback, at all levels, will be vital to the program’s success.