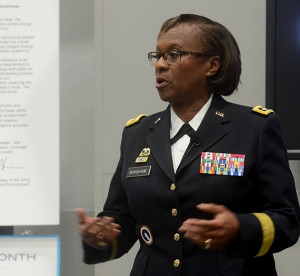 The acting secretary of the Army recently authorized formation of an Installation Readiness Board of Directors that will examine and prioritize installation readiness programs and funding, said J. Randall Robinson.

The board will be responsible for, among other things, making decisions such as which of the 23 percent of Army-wide poor or failing facilities should be renovated, and which installation programs will be kept or jettisoned.

Robinson, the acting assistant secretary of the Army for Installations, Energy and Environment, spoke earlier this month at the Association of the U.S. Army’s Annual Meeting and Exposition. He said board decisions will be directly linked to “warfighter readiness, not wants and needs.”

The new board will be chaired by the vice chief of staff of the Army, as well as the assistant secretaries of the Army for IEE and Manpower and Reserve Affairs. Voting members will be Army four-star generals.

In the coming months, for instance, TRADOC will host the “Installations of the Future Mad Scientist Conference,” he said, where military experts, as well as representatives from academia and industry will be encouraged to weigh in on installation readiness.

Installation vulnerabilities
One factor likely to weigh heavily on the minds of those making decisions about Army installations is facility security. Robinson said it can no longer be taken for granted that where Soldiers work and live is 100 percent secure.

“Installations are no longer a safe haven — they are part of multi-domain battle’s strategic support area and are constantly under attack, even today,” he said, referring to cyberattacks, as well as insider threats.

Robinson noted that Russian drones over Ukraine, for instance, were able to exploit vulnerabilities at military bases there, and the same could happen to the U.S. Army’s own military bases.

“What happens when the Army’s ability to project combat power is disrupted by attacks, both physical and cyber, against our installations, our transportation and communication infrastructure, and the communities in which they sit?” he asked, adding that technology provides both opportunity and threats.

Robinson said personnel must guard against social media posts that may put families and Soldiers at risk, hacked computer systems that may impede the flow of critical operational information, power disruptions that affect infrastructure, and even contaminated water supplies that could result in units being unable to deploy due to sickness.

Resilient power projection platforms
Lt. Gen. Gwen Bingham, assistant chief of staff for Installation Management, said that along with addressing vulnerabilities from threats, installations of the future must be energy secure and resilient.

To do that, “we must leverage artificial intelligence, big data analytics, and smart-city research,” she said, along with developing partnerships with community organizations.

Army Directive 2017-07 establishes the “requirement to secure critical missions on our installations by providing necessary energy and water for a minimum of 14 days,” she noted.

As a result, the Army is implementing policies and initiating projects that “add reliable, diverse and redundant energy sources to our installations. We also work to improve our current infrastructure condition, ensuring the lines and equipment on our sites reliably distribute energy where we need it most,” she said.

Bingham provided some examples of energy successes that are underway now in the Army.

At Fort Hood, Texas, for instance, there’s a 65-megawatt wind and solar project that’s providing lower electricity costs, she said. That project saves the Army approximately $2 million per year, and is expected to reduce costs by over $100 million over the 30-year contract term.

At U.S. Army Garrison Schofield Barracks, Hawaii, a 50 MW biofuel project will provide Field Station Kunia and Wheeler Army Airfield with secure energy generation during emergencies, she said, noting that the facility will be above the tsunami strike zone.

At Redstone Arsenal, Alabama, a 10 MW solar project will include the Army’s first commercially available battery-energy storage system, she said.

Finally, Bingham said that the Army has awarded a total of $2.6 billion in energy savings and performance contracts and utility energy services contracts.

These contracts include third-party financing and reduce energy, water and operating costs, address maintenance backlogs, and repair or replace aged and failing equipment. Bingham said the Army pays back private partners, over time, with savings generated by energy and water project upgrades.