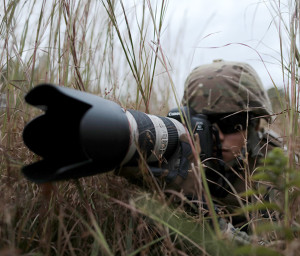 A Soldier tests his camera as part of the Tactical Digital Media training at Aberdeen Proving Ground, Md., on Oct. 11, 2017.

In a sprawling government complex of glass and steel, 20 enlisted Soldiers from multiple public affairs units across the Army gather to test new media kits bursting with state of the art equipment.

The Soldiers are members of various military occupational specialties within the visual information community, the media wing of the military. The products they are testing are part of standardized kits that are scheduled to start heading to Army units in January 2018.

The testing is being facilitated by a project named Tactical Digital Media.

TDM falls under Project Manager Mission Command, which is a part of the U.S. Army Program Executive Office Command, Control and Communications-Tactical. Acquiring so many different pieces of equipment from different manufacturers, and making sure all of it is Army compliant, is a task of herculean effort that requires many specialties to make it work.

To ensure proper capability integration, innovative contracting and solid logistics plans, TDM leveraged professionals from outside of their program office with specialties in contracting, information technology, cybersecurity, sustainment and logistics fields. Many of these subject experts were on hand for the testing of the kits.

Within the TMD program, there are two different kits that will be available, the Tactical Media Acquisition Kit and the Digital Video Acquisition Kit. The TMAK is geared for Soldiers who will be focused on still photography and the DVAK is tailored to video operations. Both sets contain a full-frame digital single-lens reflex camera, and a laptop with 4K resolution, the latest photo and video editing software and the ability to connect to tactical networks. In addition, the DVAK includes a Canon C100 cinema camera that has the capability to utilize multiple still-frame camera lenses. These standardized kits are the way forward for the Army because of the easing of logistical burdens that have plagued the visual information field for years.

Soldiers begin initial testing of their camera kits as part of the Tactical Digital Media training at Aberdeen Proving Ground, Md., on Oct. 2, 2017.

Previously, Army personnel struggled to obtain and maintain equipment. There was no one-stop shop for new gear, nor was there centralized funding for procurement. This meant that Soldiers would assume the burden of scouring different vendors and then competing with other departments for a limited pot of money that the individual units were allotted for outside expenses. This unreliable system resulted in VI Soldiers trying to work with outdated and broken gear with little to no way to replace it except through a frustrating and arduous process.

“When you go to war your commander doesn’t tell you to bring a rifle from home,” said Army Sgt. 1st Class Katrina Craig, a Non-Commissioned Officer Materiel Developer for the Army Public Affairs Center at Fort George G. Meade, Maryland. “But for our communities, we have been trying to figure out how to source ourselves even though this is our job in the military.”

Now, the new TMAK’s and DVAK’s will be fielded to units just like any other gear and supported by centralized funding that will prevent units from having to use their own funds for lifecycle and maintenance. Along with this benefit, there will be an approved item list that will allow for ordering items a la carte to add capabilities to an already highly capable kit.

In addition to the benefit of centralized funding comes simplicity of ordering. All components of the kits will have national stock numbers, which are the part numbers the military assigns to order new or replacement pieces. Doing this greatly reduces the stress involved in trying to search for replacement parts from various distributors.

The initial reviews of the tested kits have been positive by the Soldiers involved. 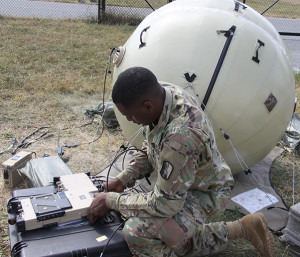 “They’re solid kits,” said Army Staff Sgt. Steven Young, a combat cameraman of the 3rd Psyop Battalion (Airborne), based at Fort Bragg, North Carolina. “There’s no one-size-fits-all for PA and Combat Camera, but I think this one is pretty close to getting it.”

The gear included is often much newer and of better quality than what they have at their assigned units. Many seemed surprised at the number of items included, and were glad to be able to work with such a complete and robust kit. All Soldier testers will be taking the kits they tested back home with them to their units to enhance mission readiness.

The kits will be used immediately in training exercises such as the Joint Readiness Training Center in Fort Polk, La., and the National Training Center in Fort Irwin, Calif. The Soldiers will also provide continuous feedback to TDM on gear performance. According to the program office, following this test, full rate production is scheduled to start in February 2018 and field about 250 kits per year, with a total requirement of 2,200. The Army’s G3/5/7 will prioritize fieldings based on units’ deployment schedules.

Overall, this project is a win-win for both the Army as a whole, and the VI community in particular. All other branches have standardized issue items so they can complete their mission, so it only makes sense the visual information branch does as well. The Army story will now be told more effectively, with newer, better quality gear, producing better quality products.