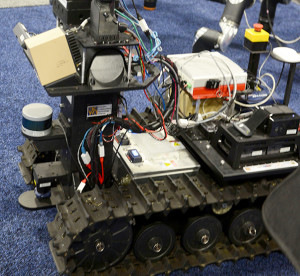 An unmanned ground vehicle is displayed at the Association of the U.S. Army’s Annual Meeting and Exhibition, Oct. 9-11, 2017, in Washington, D.C. Future ground vehicles, which will be called robots, will need to be programmed with artificial intelligence so they can act on their own within the parameter of commander intent, according to Dr. Stuart Young of the Army Research Laboratory.

While robots today operate under the direct supervision of dedicated controllers, the Army is hoping to one day take advantage of robots with more autonomy, said Dr. Stuart Young.

In the near future, it is likely robots will operate in an autonomous fashion within the parameter of commander intent, he said, defining future robots as manned or unmanned systems on land and in the air working in tandem with Soldiers.

Young, an autonomous systems researcher at the Army Research Laboratory, spoke at the Association of the United States Army’s Annual Meeting and Exposition earlier this month.

The importance of robots and Soldiers operating within the commander’s intent, Young said, is that they will someday operate in dispersed, austere, complex environments against peer adversaries where communication is expected to be severely degraded.

It’s expected in the near future that Soldiers will be totally engaged on the battlefield, and may not even have lines of communication with their next-higher echelon of command. Those busy Soldiers won’t have the time to run those robots with dedicated controllers. Instead, they’ll need them to be smart enough to operate with a great deal of autonomy.

Robots, Young said, will need to be able to sense their environment and carry out their orders without being told exactly how to do it.
Currently, unmanned ground systems are still in their infancy, he said. Existing systems are used for such closely-monitored tasks as removing explosives and conducting surveillance.

“The next thrust is human-robot execution of complex mission in heterogeneous teams,” Young said. “We want robots and humans working together at such things as setting up observation posts, reconnaissance, route clearance, perimeter surveillance and logistics.”

Clearly, there are things that Soldiers are really good at such as problem solving and abstract thinking, Young said. Robots do well at a different type of task, such as operating in chemical, biological and radiological environments too toxic or dangerous for Soldiers, and also at performing tasks too monotonous or excruciating for humans.

What this means is there would be a division of labor between Soldiers and robots based on inherent strengths and weaknesses, he said.

Challenges ahead
With the advent of driverless cars, some think technology can easily be transferred to robots on the move, but they’d be wrong on a couple of points, Young said.

While driverless car technology is a good baseline from which to start, the technology is not mature enough for the tactical conditions robots would need to negotiate, he said.

Flying robots could face similar challenges of signal jamming and flying over difficult terrain such as triple-canopy jungle or dense urban areas, where coordination with Soldiers might be problematic, he said.

To be autonomous, Young said, future robots will also need to be able to learn. As they encounter unfamiliar or unusual objects in their environment, for instance, they will need to make decisions about how to negotiate those obstacles, and they will need to remember the outcomes of the decisions they make so they can perform better the next time they face a similar challenge.

No robot will ever make the best decision all of the time, but then again, Soldiers too make mistakes or errors, Young said. The goal is for robots’ actions to be reasonable and within the commander’s intent, he said.

Another requirement is that robots must to be able to communicate with Soldiers using natural language that Soldiers use, filled with slang, jargon and incomplete sentences, as well as body language. That means they must be able to adapt to each Soldier’s voice and gestures, he said.

Conversely, there will need to be a culture change, with Soldiers accepting and trusting robots as valued members of their team, he said.

If that isn’t enough, robots will need to operate at the same operations tempo as Soldiers, he said. If they can’t keep up with the maneuver force, they’ll be useless. Current robots are pretty slow, he said.