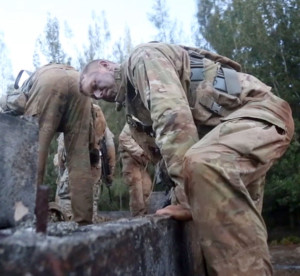 Soldiers with the 25th Infantry Division in Hawaii tackle obstacles in February 2017, while evaluating a new, lighter-weight uniform.

The current Army Combat Uniform top weighs in at about 650 grams, or about 1.4 pounds. It’s got a lot of pockets and multiple layers of fabric. When it gets wet, it tends to stay wet. And when it’s hot out, it tends to keep Soldiers hot.

The Army has a solution for that: the Improved Hot Weather Army Combat Uniform that has a whole lot fewer pockets, layers of fabric and Velcro, as well as a new fabric that is actually lighter than the current ACU.

“You can hold that uniform up with one finger,” said Brig. Gen. Brian P. Cummings, who serves as Program Executive Officer Soldier, out of Fort Belvoir, Virginia. The organization is responsible for managing those Army programs that provide most of the things Soldiers carry or wear. That includes, among other things, individual and crew-served weapons, protective gear, weapons sights and sensors, and uniform items.

Cummings said the current Army uniform has a lot of good feedback from Soldiers. But, he said, those uniforms have “all this stuff on it.”
He was talking about shoulder pockets, and pen pockets and leg pockets and Velcro swatches to hold flags and unit patches. Each one of those pockets requires multiple layers of fabric and fastening material, and buttons.

“And they all hold water,” Cummings said. “And they cost money.”

A new uniform on display at PEO Soldier changes all that. While only the top was available for viewing, it has a lot fewer pockets on it, and less extraneous fabric. And the fabric it’s made from is lighter than the fabric the current ACU is made from.

The Army wants to bring that uniform first to Soldiers in jungle environments, the 25th Infantry Division in Hawaii, in particular, where it’s both hot and wet. But Cummings said the Army also hopes to bring the uniform to all Soldiers — to make it available for purchase in military clothing stores.

“We’ve tested the heck out of these,” Cummings said.

One issue with the light-weight uniform’s new fabric is that it might prove itself more susceptible to wrinkling after washing. That could be fixed, Cummings said, with the application of an anti-wrinkle treatment. But that would only happen if it didn’t interfere with the uniform’s ability to wick away water. Also for consideration, he said, is flame-resistant capability.

… And a lighter boot, to boot
Already the Army is looking at a new jungle boot, something requested by senior Army leadership. Thirty thousand pairs were provided to Soldiers in the 25th Infantry Division in Hawaii last month for evaluation.

Initial feedback on those jungle boots has been positive, Cummings said, but he did say Soldiers are asking for something that is more comfortable even if it means the boots are less durable.

Cummings said Soldiers want the new jungle boot to be lighter and softer. And they have asked also that the soles of those jungle boots be thinner than what they are now.

The next iteration of samples, he said, are “a lot more pliable. And able to serve the Soldier well. But instead of lasting five years, they last two years.”

Those newer boots, he said, will also go through evaluation with Soldiers, and will have the same capabilities as the jungle boot Soldiers are currently testing. Among other things, those abilities include puncture resistance, more drainage holes, the ability to wick away water, the ability to push water and mud off the soles, speed laces, and lower profile heels so as not to catch on vines on the jungle floor.