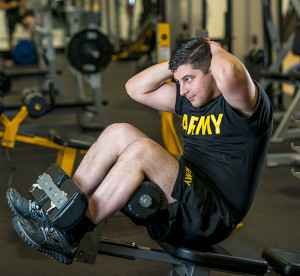 In an increasingly complex world in which higher demands will be placed on Soldiers, “we cannot afford to lower our standards” for enlistment, said Sgt. Maj. of the Army Daniel A. Dailey.

Dailey spoke at the Association of the U.S. Army’s Annual Meeting and Exposition, Oct. 11, 2017.

It would be easy to successfully make the recruiting mission by lowering physical or mental requirements, he added, “but it wouldn’t bring us capability or readiness. We have no intention of dropping those accession standards in the future.”

Sgt. Maj. Anthony C. Bowers, operations sergeant major for U.S. Army Recruiting Command, said that despite an increasingly tough recruiting environment, “there are a lot of high-speed non-commissioned officers out there every day beating the street, finding young men and women to join the Army.”

He then outlined several reasons why it’s getting tougher to recruit and why it will be even tougher in the future.

Military service is a family business. Most who serve have a family member who served and that’s a big draw, he said, adding that 79 percent of recruits have a relative who served, including 28 percent who had a parent in the Army.

In the next 30 years, it’s estimated that America’s veteran population will decline by over 35 percent from what it is today, he added.
Because of fewer and fewer veterans for youth to have a conversation with, there’s also very little accurate information out there about the Army, Bowers said.

For instance, 49 percent of people between the ages of 17 and 35 were not able to name all four services of the Department of Defense, he said. About 36 percent of them didn’t know the difference between officers and enlisted.

Today’s youth are also not inclined to leave their friends and family, he said. Those same family and friends often oppose them joining the military service, he added.

Another hurdle to joining the Army is that “we’re competing against corporate America,” Bowers said, meaning that companies often have fat pay and benefit packages that eclipse the Army’s.

Most high school students say they plan to go to college, he said. Parents and high school counselors think that if they join the Army, it means they won’t get that education. As recruiters, “we try to show the benefits of joining and that they’ll still have the ability to go to college.”

It’s sometimes an uphill fight just trying to get into the schools, he said, to administer the Armed Services Vocational Aptitude Battery, an aptitude test that helps students understand what careers, both civilian and military, are a good fit for their strengths and interests. Even when students take the ASVAB, many don’t score high enough to join, he added.

Congress requires that 90 percent of recruits have a high school diploma, Bowers said. Many potential recruits don’t and over the next 30 years, projections are that even fewer will graduate.

Within the Army’s acceptable age range of the U.S. population is a pool of 33.4 million, but just 5.7 million are qualified and available to serve. Only 136,000 of those say they have a propensity to serve in the Army, he said.

Those with two or more of these disqualifying factors total 39 percent, he added.

Finally, with the unemployment rate down from what it was several years ago, more jobs outside the Army are available, he said.

James Cox, Active Duty Brand manager, Army Marketing and Research Group, added to Bowers’ list, noting that there’s a widespread perception out there that people who join the Army do so because they have no other opportunities and nothing better to do in life.

Cox, who was a recruiter in the Army before retiring, said his group is trying to provide information to young people so that when they meet a recruiter, they will have a baseline understanding of the Army.

The group’s marketing efforts are trying to use the language of youth in advertisements and including people from all ethnicities, cultures and genders.

Ads target people the Army needs to recruit such as those in cyber fields, he said. A recent recruiting video portrays Soldiers going after malicious hackers, depicting the Soldiers as having the ability to code and being cool.

The ads aim to funnel youth to recruiters or to get them to find more information on goarmy.com, he added.

The way it’s doing that is through the administration of the gender-neutral Occupational Physical Assessment Test, or OPAT, which is used to assess recruits’ fitness for various occupational specialties.

At first, it might seem that the OPAT might be another hurdle to joining, East said, countering, “no one fails it. You can retake it as many times as necessary. It just means you’re not ready to ship to initial military training.”

And, those who score better in the OPAT graduate at higher rates and have fewer injuries during initial military training, he said, particularly women.

Since the OPAT is less than a year old, those are initial findings, he added. A full-up review of OPAT results will be conducted in January.

Covid-19: My experience then, now, and tomorrow

Covid-19: My experience then, now, and tomorrow