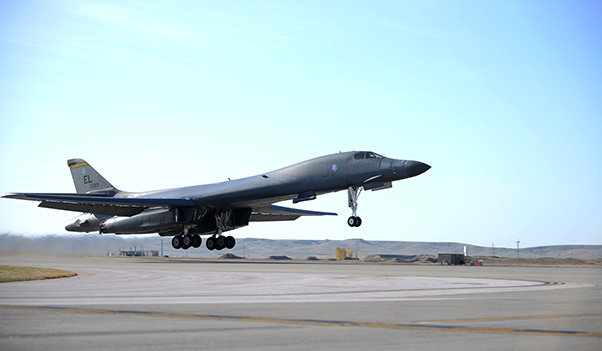 A B-1 Bomber takes off from Ellsworth Air Force Base, S.D., to participate in Green Flag exercise 18-1 on Oct. 18, 2017. Green Flag is a joint training exercise held 10 times a year at Nellis Air Force Base, Nev. that tests aircrew and maintainer’s war fighting capabilities.

Aircrew from the 34th and 37th Bomb Squadrons and maintainers from the 34th Aircraft Maintenance Unit, are taking part in this exercise to hone their skills in close-air support and air-to-ground combat scenarios.

Green Flag also provides an opportunity for the Air Force to train with Army units and practice destroying targets with Joint Terminal Attack Controllers on the ground.

“It’s very important for us to practice how we fight and to showcase what we do every day,” said Capt. Lacey Koelling, officer in charge of the 34th Aircraft Maintenance Unit.

This exercise bridges the gap between Air Force and Army units making them a more effective fighting force. The training strengthens the relationship between aircrew and maintainers.

Green Flag is a joint training exercise that takes place 10 times a year, where aircrew from multiple Air Force bases fly out of Nellis AFB to support ground units at the U.S. Army National Training Center at Fort Irwin, Calif.