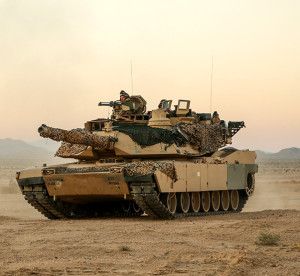 U.S. Army Soldiers assigned to 2nd Brigade Combat Team, 1st Armored Division, react to simulated contact in an Abrams tank during Decisive Action Rotation 17-08 at the National Training Center in Fort Irwin, Calif., Aug. 14, 2017. Fielding the next generation of combat vehicles is a modernization of the Army Chief of Staff Mark A. Milley and Acting Secretary of the Army Ryan McCarthy.

U.S. Army Materiel Command is pivoting its strategic focus to better align with modernization priorities set by senior Army leaders. The move is expected to enable the readiness and resilience of the future force.

In a letter released earlier this month, Acting Secretary of the Army Ryan D. McCarthy and Chief of Staff of the Army Gen. Mark A. Milley identified six modernization priorities. Those priorities are long-range precision fires; a next generation of combat vehicles; future vertical lift platforms; an Army network with hardware, software, and infrastructure; air and missile defense capabilities; and Soldier lethality.

“Our Army will implement these modernization priorities to improve our acquisition and modernization processes to ensure future generations of Soldiers continue to be the most lethal fighting force ln the world, for the next seven decades and beyond,” the letter read.

For the last nine years the Army has focused on its current readiness capabilities and made small incremental improvements that provide resources to the forces in the fight, according to Lisha Adams, the executive deputy to the commanding general of U.S. Army Materiel Command.

The modernization investment strategy has not changed throughout the years, Adams said. Additionally, non-discretionary spending has decreased, and now more funding is required for new requirements like cyber security, automation and the rising costs of sustainment.

“The rising costs, coupled with budget cuts, are generating a growing concern for future readiness,” Adams said. “It is more than just prioritizing how we spend our money. When our means no longer support our end, we must change our ways. It is imperative to reduce the costs of doing business to ensure sufficient funding for modernization.”

The Army, she said, must change its thinking on modernization.

Likewise, the issue of chronic underfunding left the Army with some tough decisions, said Maj. Gen. John A. George, the director of force development within Army G-8.

“Money could solve a lot of problems,” George said. “We have been $6 to $8 billion in the hole every year in our research, development and acquisition accounts. The secretary and chief are working to close that gap.” 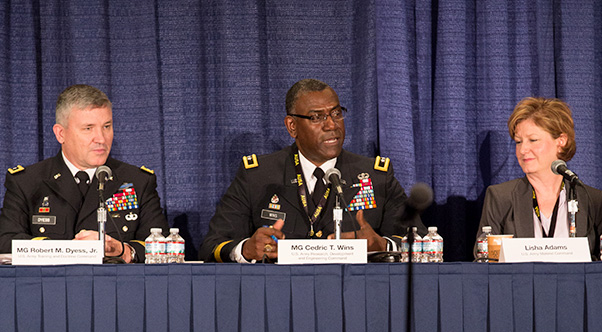 Character of conflict
The future characteristics of war will define how the Army prepares for conflict and influence Army Materiel Command’s readiness perspective, said to Maj. Gen. Robert M. Dyess, the chief of staff for the Army Capabilities Integration Center inside U.S. Army Training and Doctrine Command.

These complexities have challenged the nation’s cost-benefit relationship with sophisticated, all-domain, anti-access and area-denial capabilities.

“These implications are driving our need for a multi-domain battle concept,” Dyess said. “They will affect how we fight because the battlefield is expanding, compressing and converging simultaneously.”

Winning the fight
To help stay ahead of the nation’s adversaries, the Army needs to consider the technological rate of change as it affects requirements development, Dyess said.

In some cases, requirements can be obsolete before a requirements document is even developed or finished. Cyber and electromagnetic capabilities are a great example of that, he said.

To account for that problem, Dyess said, acquisition timelines need to be faster.

In addition to the independent research and development provided by RDECOM scientists and engineers, the command collaborates with academic institutions and industry by funding research efforts that could potentially provide capabilities for the future Army, Wins said, adding that collaboration inside the Army, between commands and organizations is also important.

“For example, if we put more armor on an Abrams tank, which increases the weight, have we thought through what it does to the trucks, rail and air transport?” Davis asked. “We have to think about this stuff up front as we do these requirements.”