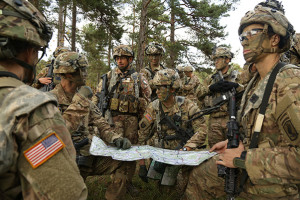 Gen. Robert B. Abrams recalled once being awakened at 2 a.m. on a Friday. It was the early 1980s then, and he was a young lieutenant stationed in a cavalry squadron in West Germany.

It was a unit alert that had woken him from his sleep, he recalled. Back then, those alerts could come at any time, completely unannounced. And when they came, Soldiers in area bars would need to report to their units, in whatever state they were in, within two hours.

Once Soldiers were assembled, he said, they had four hours to get all their gear and ammunition loaded on trucks and tanks, and move out to their tactical assembly areas. They had to be ready to cross the border into East Germany, if called to do so.

“Everyone had a sense of urgency and knew what was at stake,” he said, remembering his early days in the Army.

The Army needs to regain that same sense of urgency today, he said, but “we’re not there yet in our Army.”

However, the mindset is beginning to shift, he said. “That’s the direction the Army is now taking.”

Improved training
Abrams pointed to a number of readiness indicators, including training, which he said has improved over the last couple of years.

Recently, the Army has shifted its training focus to a “decisive-action training environment that’s very robust,” he said.

The DATE training environment includes training with both conventional and non-conventional forces in all domains during every combat training center, or CTC rotation, he said.

Leading up to the CTC rotation, units have also improved their home-station training, he said, adding that there’s been a 300 percent increase in company-level, live-fire exercises at home station over the last two years.

Even aviation units at the platoon and company levels are now participating in live-fire exercises, something not widely seen since before the wars in Iraq and Afghanistan, he said.

Non-deployables reduced
“We’ve made huge progress over the last couple of years in reducing the number of non-deployable (Soldiers),” Abrams said, adding that it’s still the No. 1 readiness challenge facing the Army today.

Some units have seven or eight percent non-deployables, he said, so there’s still some work to do to shrink those numbers.

Abrams attributed improvements in reducing the number of non-deployable Soldiers to several factors, including the fielding this year of the commander’s Medical Readiness Dashboard. That computerized medical update allows company and battalion commanders to better understand and deal with the medical status of their Soldiers.

Improved physical training is another area the general credited with reducing injuries and elevating fitness levels. He gave a shout-out to a pilot program now underway that is incorporating a new Soldier readiness test involving four brigades from FORSCOM that are evaluating “all five measurements of fitness.” 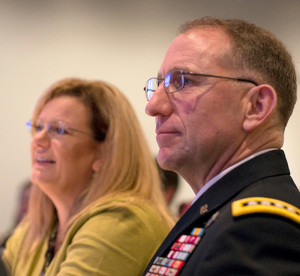 Gen. Robert B. Abrams, commander, U.S. Army Forces Command, participates in a panel at the Association of the United States Army’s Annual Meeting and Exposition, Oct. 9-11, 2017.

The Army is moving away from an “industrial-age medical system,” to one that’s more like the type used for professional athletes that gives Soldiers the care they need “at their point of impact and at the point of injury,” he noted.

The importance of care is so important because “muscular-skeletal injuries continue to impact Soldiers,” he said.

Improved equipment
Twelve of the Army’s 25 brigade combat teams have to date received their complete authorized stockage lists, Abrams said, and U.S. Army Materiel Command is working on equipping the rest. ASLs consist of such things as repair parts, fuel and construction material kept at each BCT distribution center.

To ensure the equipment is sufficient and where it needs to be, Abrams said FORSCOM conducts monthly logistics and aviation readiness reviews.

The biggest struggle in equipping the force right now, he said, is getting spare parts to where they are needed in a timely manner. Currently, he said, the wait time is about five times what it should be.

“Continuing resolutions crush us at the unit level,” he said. “We are unable on a monthly basis to adequately plan to support training and requisition repair parts for our fleet at a tempo we are training.”

Abrams admitted that the Army doesn’t have an adequate narrative about readiness to present to lawmakers. “We in the military intuitively know what readiness means but have been unable to articulate it to the public. Everybody wants a ready force but we have a hard time describing it.”