Editor’s Note: This is part five in a series chronicling the history of Fort Irwin and the creation of the National Training Center.

In August 1990, Saddam Hussein, the leader of Iraq, ordered his military to invade the neighboring country of Kuwait. Hussein claimed that the Kuwaiti government was guilty of stealing oil from the Ar-Rumaylah oil fields along their common border. He also accused the government of Saudi Arabia and Kuwait of conspiring to keep oil prices artificially low to damage the economy of Iraq.

At the request of Saudi Arabia and Kuwait’s government in exile, the United States formed a coalition of 13 countries to force the Iraqi Army out of Kuwait.

Operation Desert Storm began January 17, 1991 when coalition planes began bombing targets in Kuwait and Iraq. That effort would continue until late February when coalition ground forces would move into Kuwait from their staging grounds in Saudi Arabia.

When the U.S. military entered Kuwait, the results of training and tactics learned in the vast Mojave Desert were proven to be effective. The Iraqi Army was defeated in just four days. U.S. forces hit the Iraqi Army hard, moved fast and adapted tactics to overcome the Iraqi resistance.

Desert Storm was exactly the kind of fight that U.S. Army armored units had trained for at the National Training Center at Fort Irwin, Calif.

“One of the things that makes our Army so great is our ability to adapt,” said Brig. Gen. Jeff Broadwater, commanding general of the NTC. “The experience that we gained and the rewards that we gained from our hard training we saw in the results during Desert Storm.”

Troops would continue to train hard at the NTC, but soon the Army would need to adapt again.

After the terror attacks on Sept. 11, 2001, the Army would deploy to South Central Asia, this time to engage and defeat the Taliban in Afghanistan.

Operation Enduring Freedom would begin on Oct. 7, 2001 when American and British forces began bombing Taliban targets in Kabul. The coalition forces were able to take the capital city quickly, but many of the Taliban fighters and their Al Qaeda allies would fall back into the rugged landscape of eastern Afghanistan to fight as insurgents.

In March 2003, the United States would lead another coalition into Iraq to overthrow Saddam Hussein.

After the defeat of the Iraqi Army, President George W. Bush declared “Mission Accomplished” and stated that the United States and the coalition had achieved victory. But just as in Afghanistan, remnants of the Iraqi Army and Saddam/Ba’ath Party loyalists continued to resist and began shifting to insurgent tactics. Soon, religious radicals and Iraqis angered by the occupation joined the growing insurgency.

The nature of the wars in Afghanistan and Iraq had begun to change.

As the enemy adjusted tactics to counter U.S. forces, training at the NTC changed to reflect the new threat faced by Soldiers on the ground in combat zones.

Suddenly urban areas were needed in the vast expanse of the Mojave Desert occupied by the National Training Center. In areas once prized for the uncluttered space for armor maneuvers, hastily constructed towns of storage sheds and shipping containers began to appear.

Soldiers of the 11th Armored Cavalry Regiment, the NTC Opposing Force, would transform from a Soviet-style Motorized Rifle Regiment into many different roles. Some would stay on their vehicles and serve in their traditional role as an armored force. Others would dress in civilian clothes and populate the new villages. They would simulate civic leaders, local populations and insurgents.

Units training at the NTC would now have to work through problem sets, like an insurgency that is blending into the population, and conduct more operations in urban areas.

“We took all the lessons that we could, fully knowing that you can’t duplicate everything you’re going to see in combat,” said Broadwater.

One thing was missing from the training scenarios at the NTC. Soldiers in Iraq and Afghanistan were trying to negotiate the complex social, religious and political environment they found in the combat zones, while trying to fight an elusive enemy.

In 2005 the NTC found a way to bring all the cultural and moral dilemmas faced by deployed units to the training area. The training center began to hire American citizens who had been raised in Iraq and Afghanistan to play some of the more important training roles.

Mayors, governors, police and other leaders in the training villages now had real-life knowledge of the traditions and social norms of the areas where the unit would deploy.

Training units could now focus on locating and eliminating the insurgent and criminal networks by working more with human intelligence, talking to individuals and developing relationships that would allow them to collect information on enemy locations and plans.

Our Army has been able to adapt lessons learned to give soldiers experience before they deploy, according to Broadwater.

“And that experience builds confidence, not only in yourself and your unit, but it also gives you the ability to quickly react to a situation and maybe exploit an opportunity,” he said.

“Because they have seen it before,” Broadwater added. 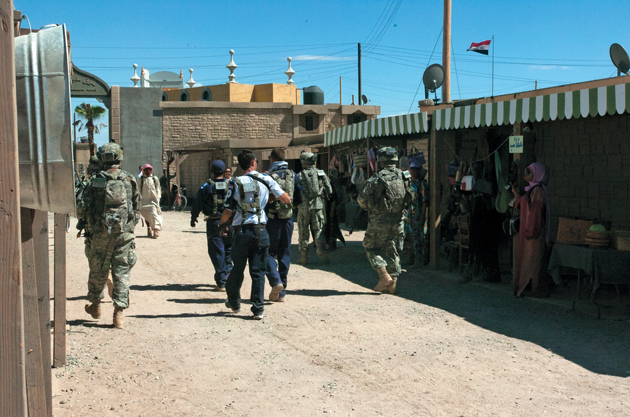 A U.S. patrol enters the training village of Medina Wasl during a rotation in 2008. The unit is accompanied by the chief of the local police force, who will introduce the commander to the regional governor before they meet to discuss how the U.S. Army can assist the region. The meeting should begin a dialogue where the commander builds trust with the local government and asks for their assistance to fight the insurgent element hiding in the local population.