FORT IRWIN, Calif. —  E.J. Ane, the son of Master Sgt. Eteru Ane and Mrs. Fionna Ane, was named a School Winner by the national Wendy’s High School Heisman competition Oct. 19. The award recognizes student athletes who exemplify excellence in the classroom, on the field and in their communities.

Ane is a senior at Silver Valley High School in Barstow, Calif., where his favorite subjects are English and psychology – though he also joked that he likes the “subject of lunch”. He plays defensive end, outside linebacker and running back for the Trojans’ varsity football team. Outside of school, he is also active in his church, works a part-time job as a bagger at the commissary, and still makes room in his schedule to spend time with family and friends. He credits his faith and his parents for helping him achieve his goals and keep the numerous facets of his life balanced.

“I really leave everything with God, he guides me through whatever,” Ane said. “But really I owe it to my parents. They help keep me straight, and whatever I do, I always ask them for help or guidance, and they always drive me in the right direction. So I thank them.”

Born in Frankfurt, Germany, Ane said his family moved to Washington and then to Fort Hood, Texas, where he first started playing football in sixth grade. He began his high school football career in Louisiana, then transferred to Silver Valley at the start of his junior year when his family relocated to Fort Irwin.

With the encouragement of his coaches, E.J. applied for the Wendy’s High School Heisman earlier this year. The competition, held every year since 1994, honors the accomplishments of the “best high school seniors” in the country. It is based on values such as community service, treating others with respect, dedication to education and athletic achievement. At first, E.J. said he did not realize he had been named a School Winner when the results were announced in October.

“It’s crazy because I didn’t know I’d won until I was walking around campus, and I guess they had posted it on our school website so all the teachers were congratulating me,” Ane said. “I didn’t know what it was about. I thought it was because of our game, so I just said thank you. But then I actually met with my coach and he told me I had won, so it was a good feeling.”

But to those who know E.J., the award came as no surprise.

“He’s the perfect candidate for something like that,” said Mike Meyer, the athletic director at Silver Valley High School and one of E.J.’s coaches. “As a student and as an individual, he’s the nicest kid you can meet on campus. He’s nice to everybody. For the stardom he has behind him, you would not be able to tell that with him walking on campus. He’s that humble.”

Still, when it comes to football, E.J. is a fierce competitor, Meyer added.

“On the field, he’s a totally different kid,” he said. “It doesn’t matter if you’re friend or foe, it’s game time. It’s serious for him at that point.”

E.J. said it was an honor to earn the award, and when asked what he would tell younger kids who look up to him as a role model, he emphasized the importance of education.

“It feels good to know that people look up to you. I feel honored and blessed,” he said. “[I would tell them] stay focused, and education is always first. Get your education first and everything will fall through after. Hard work, stay focused, and when you’re having trouble, just always look for someone to help guide you through those things and obstacles.”

After he graduates, Ane is considering continuing his own education at Washington State University, where he has been offered a scholarship. Silver Valley High School will be sad to see him go, said Meyer.

“Obviously, knowing he’s a senior we’re going to miss him on all aspects of our campus here. That’s one of the things you don’t look forward to with a student athlete,” he said. “At the same time, we know he’s going to go do big things and we’re excited to see what he does next.” 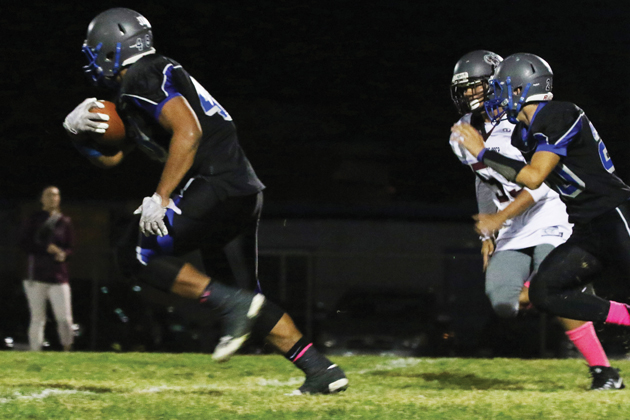