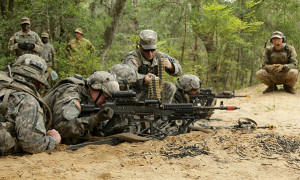 The Army’s relatively new Associated Units concept has been mutually beneficial to both the active and reserve components, said Maj. Gen. Joe Jarrard.

Jarrard, adjutant general of the Georgia National Guard, spoke last month during the Association of the U.S. Army’s Annual Meeting and Exposition.

When the Associated Units pilot was launched in March 2016, Chief of Staff of the Army Gen. Mark A. Milley explained how the program would enhance the effectiveness of the fighting force.

“Much of [the] Army’s capacity is resident in the Reserve components and we must rely more heavily on them to meet the demands of a complex global environment,” Milley said. “The Associated Units pilot allows us to leverage the capabilities and capacities of the active component, Army Reserve and the Army National Guard as one Army.”

The Associated Unit idea involves select National Guard and Reserve units throughout the U.S., training and in some cases integrating with active Soldiers.

In Georgia, that meant that the 48th Infantry Brigade Combat Team, a unit with the Georgia National Guard, associated with the 3rd Infantry Division, an active duty unit from Fort Stewart, Georgia.

At the same time, an active duty battalion from Fort Benning, Task Force 1-28 Inf., fell in under the 48th IBCT. Those reciprocal moves took place a little over a year ago.

The personnel moves accelerated “experiential development of leaders of 48th IBCT and 3ID as well, from brigade commander to platoon level,” he said. “Being around another set of leaders and another organization has benefited all.”

That said, it’s hard to measure this experiential development, he admitted, but he predicted from his own observations that it will “make a positive difference when it comes to post-mobilization training.”

Besides the leader exchange program, mission command headquarters became integrated with those associated units, he said, which allowed greater coordination and situational awareness.

One of the big surprises for 3rd ID leadership, he said was trying to interface with 48th IBCT, where just 4.4 percent of Soldiers were at work Monday through Friday, he said, meaning they all had civilian day jobs.

That presented some challenges, that were nonetheless overcome, he noted.

Fortunately, representatives from the 48th IBCT, who are headquartered in Macon, were able to take time out from their schedule to be at meetings with 3rd ID leaders at Fort Stewart, he said. This helped immensely with planning and coordination.

Over the years, access to ranges at Fort Stewart were problematic and amounted to a bit of “arm-wrestling,” he said. Ever since the units became associated, however, “we got every piece of dirt we asked for.”

Another training area that has improved, Jarrard said, is technical and leader development training, to include unit movement officer courses and master- and senior-gunner courses. Previously, it was difficult to schedule Guard Soldiers into those courses.

Now, the operation sections of 3rd ID and the 48th IBCT have scheduled students, even on short notice. These types of courses build readiness, he added.

The most envied battalion in 3rd ID is TF 1-28, Jarrard pointed out. They have their own air wing now, using Guard helicopters to do air assault training any time they want. For the rest of the division, which is at Fort Stewart, scheduling with active aviation is not as easy.

Military occupational specialty-related training is also improving, he said. For instance, Grady Memorial Hospital in Atlanta has partnered with the 48th IBCT in accepting 68W medics into their facility. The benefit for the hospital is more employees and the benefit for Soldiers specialized training adequate enough to move them from level 1 certification to level 2.

Now that TF 1-28 is an associated unit, medics from their battalion have been invited for training in the hospital as well, he added. 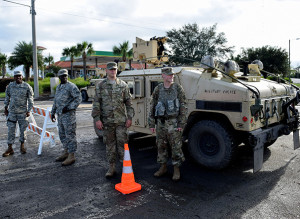 The capstone event for proving the validity of the Associated Units relationship, he said, was during the three-week long eXportable Combat Training Capability rotation that took place this summer.

Guard Soldiers relied on veteran 3rd ID observer, coach, trainers to facilitate the exercise, he said. The last time such an exercise occurred was in 2013, where the 48th IBCT had to provide all of their own OCTs. The training included a combined arms maneuver live-fire exercise.

Hurricane Irma
During a question and answer period following Jarrard’s remarks, a Soldier asked him how the brigade’s responsibility of being “ready to fight tonight” is balanced with state requirements, such as the Guard’s recent response to Hurricane Irma.

Jarrard pointed out that although Florida was more directly impacted, the Georgia Guard were in fact mobilized and sent to locations around Georgia.

“It did have a significant impact on the 48th IBCT, as the brigade was supposed to do a computer exercise at Fort Stewart at the time,” he said.

So now, the brigade must reschedule, he said. That means employers will lose those Guard Soldiers additional days and the Army will have to explain to the employers the importance of the training and additional work days that will be missed.

More about associated units
Officially, Associated Units are still in a three-year pilot phase, which will end in March 2019.

After that time an assessment will be made for how the program could expand, according to Col. Brian Ellis, chief of the organizational integration division, force management directorate, G-3.

The 27 units for the pilot program were selected “with multiple criteria in mind, including geographic location and capability gaps,” Ellis said.
Units participating in the Associated Units pilot, besides those mentioned in Georgia, are: