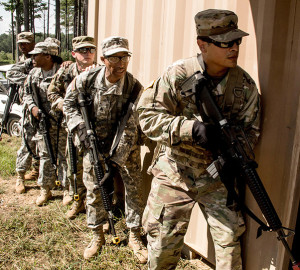 Soldiers from the 642nd Regional Support Group prepare to clear a building during an urban operations familiarization event Aug. 22, 2017, at Ft. McClellan, Ala. Soldier lethality is one of the six priorities established by the Army Chief of Staff that will be the focus of six new cross-functional teams focused on modernization and readiness.

Vast readiness improvements are a challenge worth taking because if they succeed, Soldiers on the ground will reap the benefits, said acting Secretary of the Army Ryan McCarthy.

That challenge is asking brigade commanders — all seasoned combat leaders eager for command of divisions and corps — to defer that dream and instead lead a cross-functional team that will focus on the Army’s modernization efforts.

McCarthy, who spoke at an Association of the United States Army breakfast, Nov. 8, said he’s optimistic because he and the vice chief of staff of the Army recently met with prospective leaders for those teams, and he saw within them “energy and excitement” about the new mission.

Those team leaders, “the best and brightest the Army has,” McCarthy said, will be rated directly by the vice chief of staff. McCarthy, as undersecretary of the Army, will oversee the entire effort, including development of a new Army command that is focused on modernization, and which is expected to stand up by next summer.

The purpose of the teams is to improve the quality and speed of delivery of new materiel and capabilities to the warfighter, which is currently unacceptably slow, he noted.

McCarthy said most brigade commanders are likely not experienced at acquisition, requirements and other aspects of modernization. But what they do know, he said, is what it takes to win the nation’s wars.

Each team leader will be surrounded by experts who are familiar with requirements, acquisition, science and technology, test and evaluation, resourcing, contracting, costing and sustainment, McCarthy said.

He called this approach a “vertical integration” of effort consisting of subject matter experts from across the Army, as well as some from industry and academia.

“The end state is an empowered team, rapidly integrating and synchronizing … to deliver new capabilities to the operating force” that are aligned to the chief’s six priorities, McCarthy said. 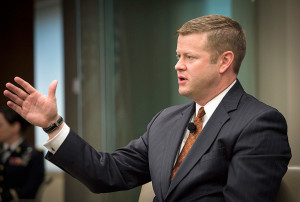 Acting Secretary of the Army Ryan McCarthy speaks about the Army’s readiness and modernization priorities at an Association of the U.S. Army breakfast, Nov. 8.

Since there are six priorities, there will be six teams, each assigned to one of the priorities, he added.

Leading the effort means figuring out how U.S. Army Forces Command, U.S. Army Materiel Command and U.S. Army Training and Doctrine Command will interface with the teams, along with the roles and responsibilities, he said.

Another part of the challenge, McCarthy said, is getting buy-in from personnel across those existing commands.

Funding is another challenge, he said. The amount needed is yet to be determined, but the costs will most likely be reflected in the fiscal year 2019 budget.

Additional authorities may also be required to restructure the Army’s modernization effort — the biggest such restructuring in half a century, he said.

The authorities and funding would need to be approved by the Department of Defense and lawmakers, he added.

The secretary said an end to continuing resolutions and passage of a budget with “some teeth” would go a long way towards furthering Army modernization efforts.

In the meantime, lawmakers can find savings with another round of base realignment and closure, he said, noting the while BRAC may be politically challenging, it is “absolutely necessary.”

Lots of soldiers, lots of missions
McCarthy noted that both Congress and the administration have voiced support for increasing manning levels in the Army. But he also said they should first take a hard look at U.S. commitments around the world and determine if the Army might be overextended. He said Soldiers are now deployed in 140 countries and their deployment-to-dwell times are such that it poses hardships for troops and families.

McCarthy also said that one of the important places Soldiers are now stationed is South Korea. While he didn’t go into the classified details, he did say that AMC has been involved in getting those Soldiers properly equipped, and FORSCOM has been involved in establishing the manning and readiness levels needed in the event of a contingency operation there. The Army’s chief of staff has also been closely following events there and is deeply involved in the process, he said.