“It’d be nice if youth were educated more about what the military does — the logistics and infrastructure. … They think the military is all about shooting guns, but that’s a very small part of it.”

That sounds like something a service member would say, right? But that actually came from a civilian who got to live life as a soldier for a day at Fort Irwin, Calif., the home of the Army’s National Training Center.

Most of the civilians invited had no expectations for the day. But after a ride on a Black Hawk helicopter, a dusty drive into the desert and an intense day of throwing smoke canisters, firing guns and running around in the “box,” as the NTC is affectionately called — let’s just say the respect they already had for the military increased a lot.

So what, exactly, were they doing, and what did they take away from it? Here are some of the most interesting parts of their immersion experience.

1. The “box” is sandwiched between Los Angeles and Las Vegas. And it’s huge.
When you mostly think of California, you think of palm trees, beaches, Silicon Valley and Hollywood – not brown, isolated desert. But that’s exactly where Fort Irwin is – it’s a military oasis, of sorts, in the Mojave Desert.

Fort Irwin proper, where military families work and live, is the smallest part of the post. It’s the training area – which takes up 1,200 square miles of desert – that accounts for its vast size. About 50,000 service members from all branches train every year on its unforgiving terrain. 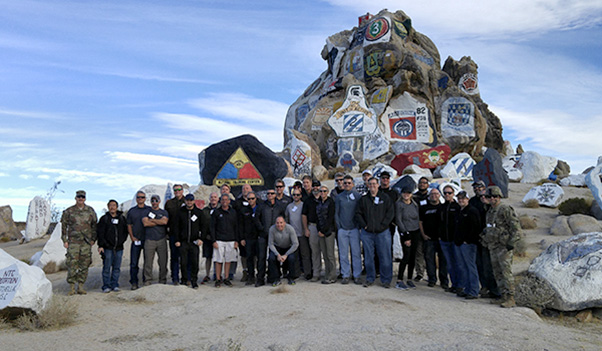 A group of business leaders pose at the Painted Rocks outside Fort Irwin during the 2017 Immersion Experience.

2. Sustaining the forces training in the “box” is an undertaking.
Rotating units spend about a month at Fort Irwin, and 14 of those days are spent in the box, where they live, train, eat and deal with unexpected problems just as if they were deployed. That means all meals, gasoline and equipment must be packed onto thousands of vehicles before they head out; it’s a massive hassle to come back for something they forgot.

“The logistics that go into running Fort Irwin astound me,” said private-for-the-day Vince Gilligan, the creator of the Emmy-winning show “Breaking Bad.” “Feeding and clothing [soldiers], and keeping all the tanks and Humvees and Bradley Fighting Vehicles up and running, and all the mechanics it must take – it puts Hollywood to shame, and we pride ourselves on the logistics of making a movie.” 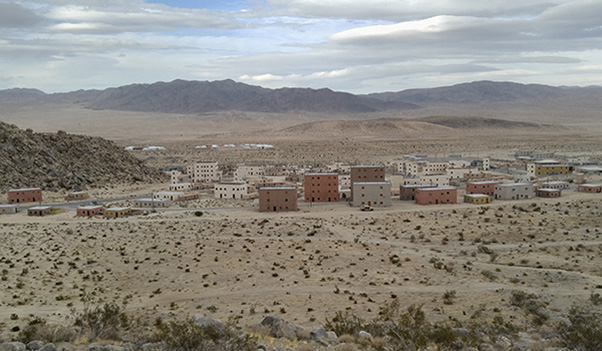 The town of Razish, the largest of 12 “cities” inside the 1,200 square foot box that is the National Training Center in the Mojave Desert.

3. There are 12 “cities” in the training area, complete with role players.
Aside from endless mountains and desert, there are 12 cities with hundreds of buildings used for real-life simulations. The civilian soldiers spent the day at the largest simulated city, called Razish, where role players are brought in to simulate a busy town market. It’s so soldiers can be prepared to assimilate to their new surroundings and know how to deal with distractions.

Ansan Hanza worked as an interpreter at the U.S. Embassy in Iraq before coming to America in 2003. The Iraqi native spends a day or two a month in “the box” peddling jewelry to soldiers.

“We believe what we are doing here helps,” Hanza said of the role playing. 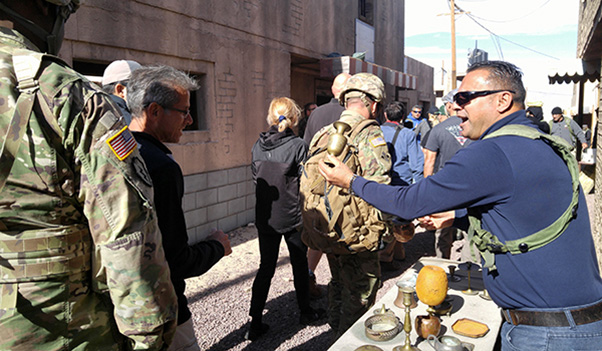 Civilians get a taste of what it’s like in a busy overseas market. It’s just one of the life-like situations that soldiers train for at the National Training Center in Fort Irwin.

4. Anything can — and does — happen in the box.
Units go into the box to fight a fictional enemy, but if you think they ever win, think again. The scenarios are designed for the 11th Armored Calvary Regiment (which calls this terrain home) to win. The “Blackhorse” soldiers play the bad guys in every scenario, and throw every possible problem at the training soldiers so they make mistakes and learn from their weaknesses here – not down range.

The visiting civilians watched 11th ACR soldiers raid a building, extract a high-value target and get him safely out of the area. The scenario involved Bradley fighting vehicles, M249s, M240Bs, smoke cans and real explosions.

“I didn’t realize just how in depth the training is for our Army soldiers,” said Alex Striler, the director of sales and marketing at Team Lucas, a Lucas Oil partnership program. “When you come here and see it firsthand, you really get an appreciation for the investment the military makes in its personnel.”

“I wasn’t expecting the degree of preparedness that they’ve been explaining to us, where it’s training for absolutely every environment,” said Glen Powell, an actor who most notably played John Glenn in “Hidden Figures.” “They’ve created an environment that simulates the most realistic aspects of war. … This is one of the coolest things I’ve ever seen.”

For the soldiers, showing instead of explaining their roles offers invaluable perspective.

“A lot of people just don’t know what we do, and this gives a small peek into it,” said Army Capt. Mark Lewis, who led that day’s scenario. 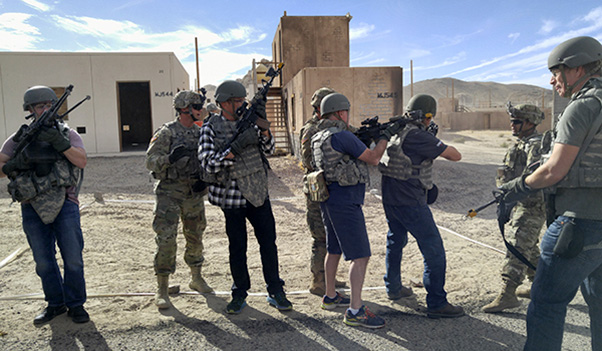 lackhorse soldiers teach civilians how to clear a room during the 2017 Fort Irwin Immersion Experience.

5. The civilians didn’t just watch — they got to do.
Next came the really fun part – when the civilians, including me, got tossed into the same scenario they just watched. This meant everyone had to first struggle their way into a heavy armored vest, flak jacket, helmets, gloves and goggles.

From there, we stepped over sand, stones and old shell casings into the “attack” area, where we learned how to clear a room with some pretty hefty guns. Then the Blackhorse soldiers split us up in small groups, where we learned our individual roles.

On the soldiers’ cue, some civilians ran toward the target building amid a haze of smoke bombs, shooting blanks at the “enemy,” who was firing back. I followed another soldier up to a roof, where my civilian partner helped fend off that fire with an M240B. I tossed yet another smoke bomb to clear the way for our “soldiers” returning from the building they’d just breached.

Smoke hit our throat and eyes, and our ears were ringing from the heavy gunfire and explosions within feet of us. I had to squat on a roof for about 10 minutes, which wasn’t particularly easy when you’re wearing 30 pounds of gear. And did I mention the sand whipping our goggled eyes at about 37 miles per hour? There was that, too.

“It’s a sobering thing, because when you play video games or watch TV, it doesn’t seem as daunting and taxing physically, mentally and emotionally,” Gilligan said.

6. Everything is digitized.
While our performance wasn’t being judged, the real soldiers always are. After every mission, an after action review dissects all of their moves – which is easy since everything is digitized. The vests the soldiers wear can track each person’s movement and calculate when they were shot or injured (in case there’s a dispute over who hit who). So during an AAR, the units can watch their movements on tablets and see exactly what they did during the training. 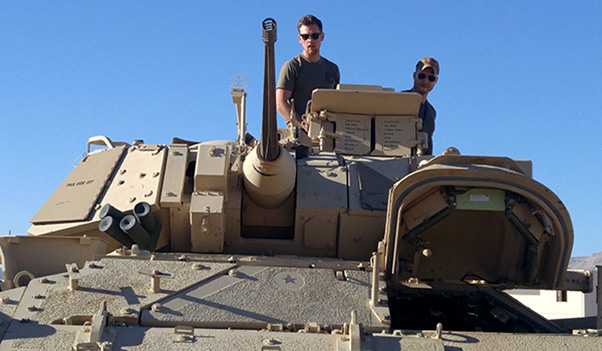 7. Why bring in civilians? To show them military jobs can translate.
While some civilians were shooting M2’s and climbing into Abrams tanks, others sat down with the post’s leaders to chat about how soldiers’ jobs translate to the real world.

Aside from the DoD Transition Assistance Program and Soldier for Life, Fort Irwin Garrison Commander Army Col. Seth Krummrich said the Career Skills Program lets soldiers leave the Army temporarily to test out their post-military career ideas. That includes in nearby Hollywood, where a lot of logistics and sustainment skills can translate. Krummrich used a new partnership with NBC Universal as an example.

“We sat down with their HR team and said, ‘OK, who are you trying to hire? Let me translate what kind of soldier … could actually fill that with a skill experience match,’” he said. “That’s one of the one ways we can get you to hire a great veteran.”

8. And last, but not least….
MRE lessons are always fun!

For lunch, the civilians had what soldiers in the field have – the good ole meal ready to eat. Pretty much everyone needed a serious lesson from our military tutors, from getting the tough plastic brown bag open and figuring out what pouch goes where, to how the heating element works and how long the meal has to sit before it’s edible.

And then there’s the question of taste – are they good or bad??

At the end of the day, the newly minted privates hopped back on the Black Hawks and sailed into the sunset to go back to civilian life. It’s an experience they’ll never forget, and one we hope they share with as many people as possible!