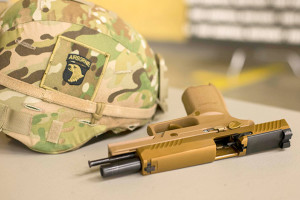 The XM17 or Modular Handgun System is the Army’s newest handgun currently being fielded to Soldiers. The 101st Airborne Division (Air Assault) is the first unit in the Army to field the service’s new handgun. The division received more than 2,000 MHSs on Nov. 17, then unpacked, inventoried, inspected and test fired a portion of the pistols, Nov. 27. The 101st ABN began fielding the MHS, Nov. 28.

In an effort to improve Soldier and unit lethality, the Army fielded the new Modular Handgun System to the 101st Airborne Division (Air Assault) 18 months ahead of schedule, according to Lt. Col. Steven Power, product manager for individual weapons within Program Executive Office Soldier.

“The Army selected the 101st Airborne based on the alignment of the new handguns and ammunition being available, and the unit’s training and deployment schedules,” Power said. “The XM17 and XM18 Modular Handgun System program is one of the first in a whole line of modernization efforts that the Army will pursue over the next few years.”

PEO Soldier held a media roundtable, Nov. 30, to discuss the fielding of the MHS.

The 1st Security Force Assistance Brigade at Fort Benning, Georgia, is slated as the next unit to receive the new MHS.

Because the M9 and M11 are approaching 30-years of service, the Army needed to find a new handgun system that is “more accurate, ergonomic, reliable and durable, and has increased terminal effects,” according to sources at PEO Soldier.

The preexisting handgun systems have several key deficiencies. The M9, for instance, had a manual safety in the form of a decocking lever. The M11 has no external safety lever, according to sources at PEO Soldier. Furthermore, the M9 has poor ergonomics, lacks integrated rails for attaching targeting enablers, and does not support Army-issued suppressors.

During the source selection process, handguns and the ammunition went through rigorous operational, developmental, and user-acceptance testing. The Army Armament Research, Development, and Engineering Center and the Army Research Laboratory played a key role in determining the level of lethality of each weapon system and caliber, according to Daryl Easlick, the Maneuver Center of Excellence Lethality Branch deputy.

“We wanted to find a weapons system that fit a more offensive capability,” Eastlick added.

Moving forward, the Army’s next challenge stems from the execution of fielding, to include the “alignment of funding, production schedules, weapon and ammunition delivery, and coordinating unit availability and user acceptance from gaining major commands,” Dawson said.

After the fielding logistics are sorted, Dawson said, weapons, magazines, spare parts, and accessories, such as holsters, can be delivered to each unit.

Additionally, Soldiers assigned an MHS will qualify similarly to what they would have done with their M9s, Dawson added. While qualification standards have not changed, user testing has indicated that proficiency scores can be expected to improve.

Dual-arming Soldiers
With the fielding of the new MHS, a recent change in Army policy will require team leaders and above to dual-carry the XM17 and M4, according to Easlick. Aside from special operations and military police units, junior leaders are not typically required to carry a sidearm.

In coordination with other proficient units and under the guidance and support of the MCoE, the 101st is laying the foundation for an Army-wide training program that will teach Soldiers how to properly cycle between both weapons, while keeping lethality on target, according to Sgt. 1st Class Andrew Flynn, the 101st master gunner.