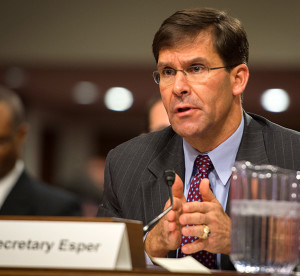 The new U.S. Army Futures Command with its eight cross-functional teams, or CFTs, will provide the unity of effort and command needed to reduce the requirements development process from 60 months down to around 12, said Secretary of the Army Dr. Mark T. Esper yesterday.

Futures Command was informally referred to as modernization command when its inception was first announced by the acting secretary of the Army and chief of staff in October.

Esper spoke Dec. 7 during a Senate Armed Services Committee hearing on acquisition reform efforts within the Department of Defense.

There are eight CFTs being organized, he said. They consist of leaders from the requirements, acquisition, contracting and sustainment communities, who report directly to the under secretary and vice chief of staff of the Army.

The CFTs’ primary focus will be on the Army’s six modernization priorities, Esper said, which are the development of improved long-range precision fires, a next-generation combat vehicle, future vertical lift platforms, a mobile and expeditionary Army network, air and missile defense capabilities, and Soldier lethality.

“Mindful of past failures, the Army will ensure that technological solutions are mature before we begin a program of record,” Esper said. “This includes a threat-based strategy that has aligned 80 percent of the Army’s science and technology funding requests against the six modernization priorities.”

Also, the process for getting requirements met will be streamlined, he said, consisting of an iterative process including prototype development; demonstration and testing; and evaluation.

If the evaluation results in failure, then that three-step cycle will be repeated until a successful outcome is obtained, followed by production and fielding decisions, he said.

Success, he added, could just be getting to the 80 percent solution on a requirement.

The secretary also listed a number of other modernization efforts the Army is focusing on.

In the past, personnel turnovers within programs of record has been a concern, he said. To negate that, program managers’ tenures will be aligned with critical program milestones. 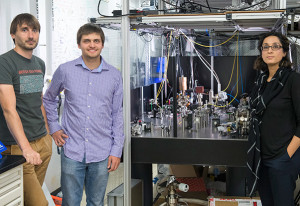 University of Maryland postdoctoral researcher Dr. James Siverns (left), University of Maryland graduate student John Hannegan, and Army Research Laboratory physicist Dr. Qudsia Quraishi are the first researchers to trap ions, which could enable the Army to get quantum computing capability. They are shown in the lab in October. In a related development, the Army is reforming its requirements and acquisition process, Secretary of the Army Dr. Mark T. Esper told lawmakers at a Senate Armed Forces Committee hearing, Dec. 7. 2017.

The Army has also written eight directives intended to improve the capability and materiel development process by refining how requirements are generated, simplifying the contracting and sustainment processes, and evaluating progress through metrics, he outlined.

Finally, he said that the Army has “reinvigorated” its Requirements Oversight Council. A recent result of that effort was getting the new Army handgun delivered much sooner than anticipated.

While making reforms within the Army, the secretary asked for help from lawmakers in getting a budget passed with predictable and adequate funding.

Without an adequate budget, it is especially hard for small industries to do business with the Army, he said. “We risk losing those folks who may decide to get out of the defense business and go elsewhere.”

He also asked the senators to look into simplifying the complexity of the Federal Acquisition Regulation, or FAR.

Lastly, Esper noted that the day of the hearing was the anniversary of the attack on Pearl Harbor, Dec. 7, 1941.

“We were caught off guard at Pearl Harbor,” he said. “But in a few short years we re-energized industry and the American people to fight and win that war. We need to take that same sense of urgency to the challenges we face today.”