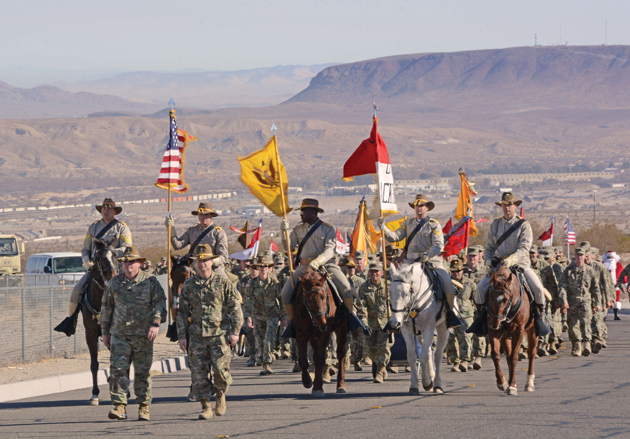 More than 500 U.S. Army Soldiers from the 11th Armored Cavalry Regiment marched and sang cadence through the streets of Barstow to the Veterans Home of California-Barstow, where they were greeted by resident Veterans and staff, Dec. 12.

Following the march, Veterans and Troopers spent the remainder of the day with one another – sharing meals and swapping stories.

“We get an opportunity every year to spend time with our brothers and sisters here at the Barstow Veterans home. This is the 21st year that we have done this,” said Col. Joseph Clark, 11th ACR Commander. “It’s just an awesome opportunity to spend time with the Veterans. I make sure to highlight with the troopers to spend the time with them. They can learn a lot from their experiences, as well as us sharing the experiences on what we are doing out at Fort Irwin.”

The event allowed Soldiers to build relationships with those that served before them and hear about their legacy.

“We have Veterans here from the Gulf War all the way to World War II, and we are 200 Veterans strong here,” said James Sullivan, VHC-Barstow’s administrator. “We have a lot of camaraderie with the 11th ACR. It’s a very special day, and our Veterans will take away a lot from this. They’ll talk about this for weeks.”