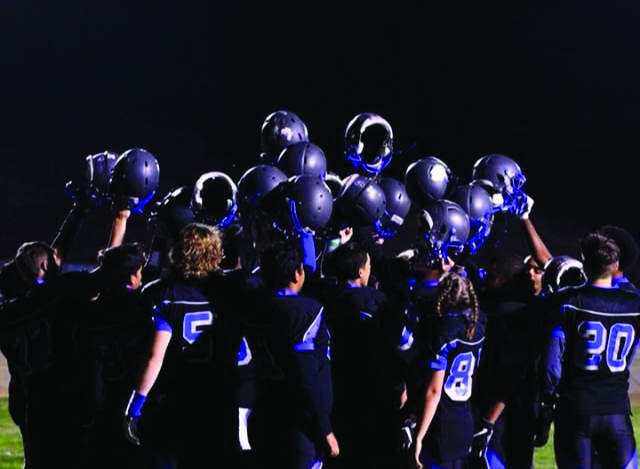 ORANGE, Calif. — The Silver Valley High School Trojans left it all on the field Dec. 2 as they competed for the CIF Southern Section Division 13 Football Championship. The team fell just short of victory, coming up 20-30 to Orange High School from Orange, Calif.

Nevertheless, many look at Silver Valley High School making the championship game as a Cinderella story. With just over 300 students attending the school – many of them from Fort Irwin — no one ever thought that the team would make it past the first round of the playoff. Some of the schools they played had more than three times the number of players, and many of the teams had been playing together for years.

Not only did the Trojans have to train hard enough to make it to the championship game — which was difficult on its own — they also had to build trust quickly.

“It is really hard to build up a solid program here, we never know which players are going to be here next year,” said Coach Mike Meyer, the assistant football coach and athletic director at Silver Valley.

Against all odds, this season the Trojans went 9-4. They also defeated two previous league champions to secure their spot in the Division 13 championship game. Coach John Stewart joked that it is a team of “desert rats, military brats, and a female kicker.”

In almost every game during the playoffs the Trojans were predicted to lose. No one expected them to make it half as far as they did.  What was different this year that took this team all the way? Both Stewart and Meyer point to the friendship among team members and the leadership on the team.

They were also both quick to point out that senior EJ Ane, from Fort Irwin, has been a fantastic leader for the team. They said Ane’s willingness to be out on the field and play whatever they need him to play has improved the morale of the whole team.

“The team as a whole was also very athletic this year,” said Coach Meyer, “which helps during games when we don’t have a lot of players to sub in and out.”

Ane rushed for over 2,600 yards, Anthony Brown contributed to more than 15 touchdowns, and Joe Thomas had over 110 tackles this season.

For Silver Valley students both in the valley and on Fort Irwin, the football team’s success means a lot to them. It proves that, although the school might be small and in the middle of nowhere, great things can — and will — come out of it. The game gave students the chance to show off their Trojan pride for the whole state to see.