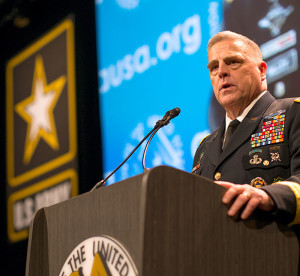 U.S. Army Chief of Staff Gen. Mark A. Milley delivers his State of Army address at AUSA’s Eisenhower Luncheon , Oct. 10, 2017. Milley delived another address to an AUSA breakfast on Jan. 17, 2018, about the importance of future readiness.

Readiness in the short term is not good enough, said Chief of Staff of the Army Gen. Mark A. Milley, during an Association of the U.S. Army breakfast in Washington, D.C., Jan. 17, 2018.

“We mortgage our future if we don’t prepare for future readiness,” he said.

In fact, the entire character of warfare is changing, he said.

It would be a “grave strategic mistake,” he continued, to ignore those changes and just sit idly by as near-peer adversaries embrace those disruptive technologies.

An example of Soldier lethality, he said, would be designing a rifle that can fire much longer distances and with greater accuracy than current models.

Army researchers and industry are right now developing this capability, he said. That effort involves, among other things, new types of ammunition, better optics and improved materials that are more suited to deal with increased chamber pressure.

Also critical to future readiness and mission command is building a mobile, reliable, powerful and capable communication system. Milley said he’s been particularly critical of current efforts in that respect.

Networks need to be mobile, he said, adding that a lot of work needs to be done in that area.

Milley also reiterated the need for more frequent and more advanced synthetic training capability as a less-costly way for commanders to provide Soldiers with the training repetitions needed to build unit readiness.

While combat training centers are invaluable and remain important venues for validating home-station training, Milley said synthetic training environments at home-station can provide a wider variety of training scenarios than Combat Training Centers can, and can do so with multiple repetitions at reduced cost.

History as prologue
As an example of how important investment in the future can be, Milley called attention to how Army modernization efforts of the 1970s contributed to preparedness nearly two decades later.

At the time, Milley said, the Army made investments in the M-1 Abrams tank, the AH-64 Apache and UH-60 Black Hawk helicopters, the M-2 Bradley Fighting Vehicle and the MIM-104 Patriot Missile System. Together, those programs were called “the big five.”

At the start of Operation Desert Storm in early 1991, he said, a flight of eight Apache helicopters — which had been introduced to the Army only about five years earlier — knocked out key enemy early-warning radar sites in the opening salvos of the conflict, paving the way for Naval and Air Force aerial strikes.

Without investment in the “big five” in the 1970s, the short, 100-hour ground war in Kuwait would not have been possible, Milley said.

Today, the Army faces the same big transition period as it did in the 1970s, he said.

Security force assistance brigade
On Feb. 8, the first Security Force Assistance Brigade will be recognized as “fully capable” during a ceremony at Fort Benning, Georgia. That SFAB will later deploy to Afghanistan.

While the Army has done the advise and assist mission for at least a century, Milley said, in the past that mission has always been ad hoc, and has been disruptive to existing force structure.

Now, Milley said, with the new SFAB unit and follow-on SFAB units that will be stood up, the advise and assist mission will finally be institutionalized within the Army. The SFABs, he said, professionalize the mission and don’t take away from other units.